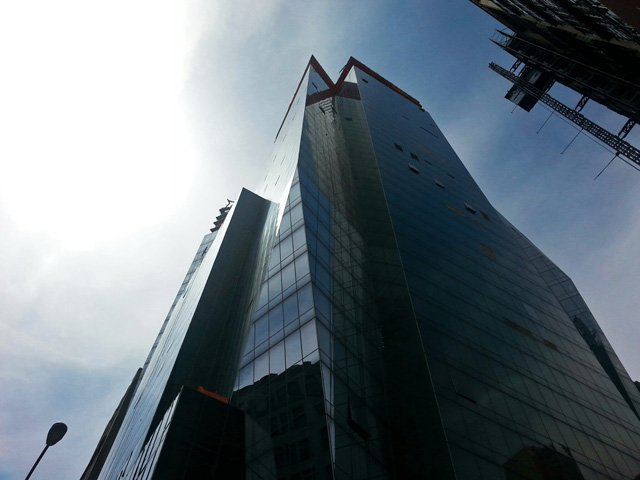 400 Park Avenue South is inching closer to completion, and glass is making significant headway on the building, which Toll Brothers City Living is developing; the project’s architect is Christian de Portzamparc. A new Youtube video highlights Portzamparc’s involvement with the project, and describes the process behind the tower’s design — noting its inspirations and origins, which are based on the architect’s own LVMH Building, on 57th Street. Even the community board loved the tower’s appearance, which has been heralded as transformative, and has luckily survived intact since initial conception back in the 2000s. In terms of construction, glass is slowly wrapping its way along and up the structure, and has almost encircled the building to its pinnacle, 476 feet above the street. The jagged angles of the facade result in dazzling reflections from all perspectives, but the vantage point immediately to the project’s northeast — at the corner of 28th Street and Park Avenue — is perhaps the most entrancing. Toll Brothers City Living has been on a recent building spree in the neighborhood, and the firm’s 160 East 22nd Street — also nearing completion — is just a few blocks to the southeast. Immediately across the street, 404 Park Avenue South is also approaching its opening day, and demand for new construction is at a fever pitch across all of Gramercy. 400 Park Avenue South stands 42 stories in total, and will have 365 units, which will be split between rentals on lower floors and condominiums above. Completion is expected next year.