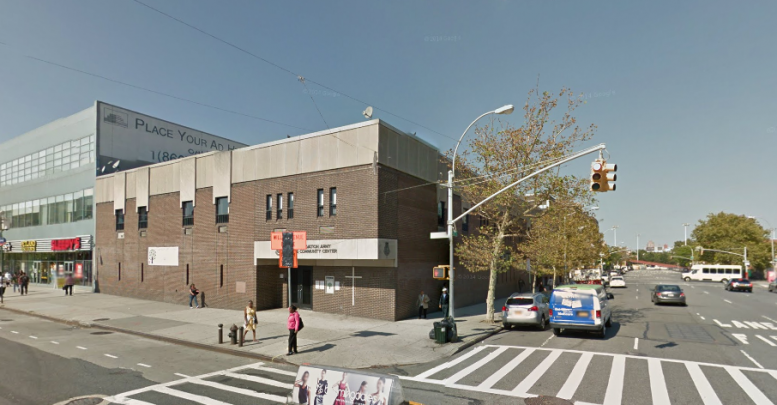 Just before New Year’s Eve, the Salvation Army filed plans for 11 stories of affordable senior housing and community facilities at the corner of East 125th Street and Third Avenue in East Harlem.

The new building would replace the organization’s block-long Harlem headquarters at 2306 Third Avenue, which stretches from 125th to 126th Street. The two-story building hosted a recreation center, religious services, a preschool, and services for the homeless. In the new development, 233 small apartments would be stacked on top of a recreation center and a church. They’d be divided across 139,833 square feet of community facility space, for average units measuring just 560 square feet.

There would be a basketball court and laundry in the cellar, followed by a house of worship on the first floor and a cafeteria, offices and classrooms on the second floor. Amenities would fill the third floor, including fitness rooms, a cafe, offices, a library, and meeting rooms. Apartments would begin on the fourth floor, with 30 units per story through the eighth floor and 17 and 18 units respectively on the ninth and tenth floors. The top floor would be devoted to another dining hall and storage.

Peter Poon Architects, based on Mercer Street in SoHo, applied for the permits.

Last year, the organization tried to sell the Williams Memorial Residence, its 352-unit senior complex on the Upper West Side, in order to finance the project. The state Attorney General blocked the sale, but it was ultimately approved by a State Supreme Court judge in Rockland County. The group sold the building at 720 West End Avenue to developer Brack Capital for $109 million last month, and it plans lease the property from the developer for two years while they build the new facility in East Harlem.

Demolition plans have already been filed to knock down the Salvation Army’s current building on Third Avenue.