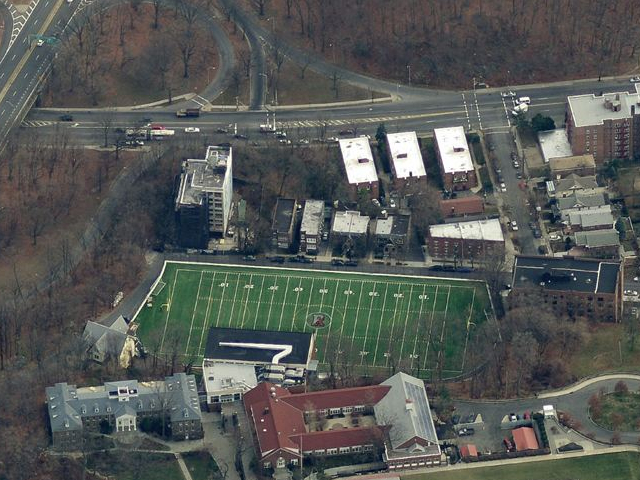 5278 Post Road -- the T-shaped lot at center above the field, overhead shot from Bing Maps

Just across the street from the prestigious Riverdale Country School, in one of the Bronx’s wealthiest neighborhoods, sits a little over half an acre of land at 5278 Post Road. In 2002, the Varkaris family of developers, based in Long Island City, bought the parcel. They tried to sell the development site a few years ago, but apparently never found a buyer willing to pay their target price.

Now that the market has rebounded, it appears the Varkarises have decided to develop the land themselves. Yesterday morning, building permits were filed by Purcell Architects for a seven-story apartment building with 95 units.

The site presents some challenges for construction, with the previous listing noting that “developers will have to contend with a considerable amount of rock.” But its hillside location also means that any future building will have sweeping views of Van Cortlandt Park; when combined with its Fieldston address and proximity to Horace Mann and the Ethical Culture Fieldston School, a market-rate building seems like the only option.

Next door, a 20-unit apartment building was erected a few years ago, offering some hints of what to expect on the larger corner site at 5278 Post Road. Van Cortlandt Views, as the building next door is called, opened in 2010, before the market had rebounded, as a mix of rentals and condos. Asking rents there range from about $1.50 per square feet per month to nearly $3 for a top floor one-bedroom, while condo listings last year were in the $600s per square foot, going all the way up to $900,000 for an 1,100 square-foot two-bedroom penthouse with a generous wrap-around terrace and expansive park views.

According to the filing, the building would contain 86,841 square feet of residential space, with average unit sizes clocking in at 915 square feet. The garage would hold 73 cars – more than required by zoning, but necessitated by the site’s removal from transit, and somewhat justified by its highway-adjacent location.

Permits Filed for 1351 Jerome Avenue in Mount Eden, The Bronx

Permits Filed for 950 Ogden Avenue in Highbridge, The Bronx