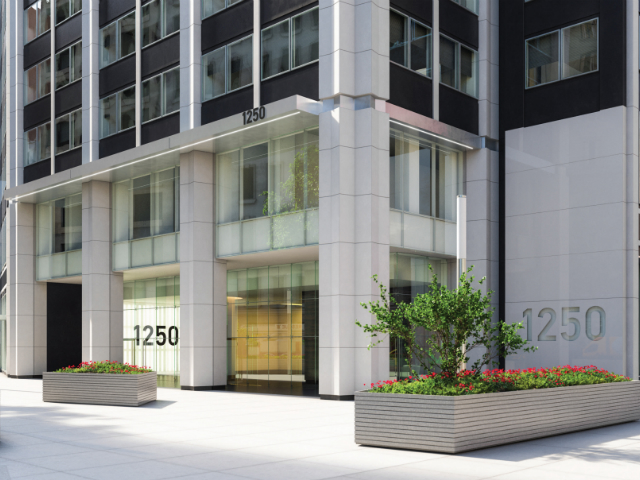 Most New Yorkers may recognize the office tower at 1250 Broadway as the entrance to Koreatown, but owner Jamestown is well on its way to repositioning the black-and-white modernist skyscraper as a tech hub. To that end, the landlord is embarking on a $3 million renovation of the building’s plaza and lobby, and shared renderings of the project with YIMBY.

The makeover involves a new glass curtain wall at the tower’s base and a new stainless steel canopy, as well as replacing “the existing stone metal cladding at the corner of the building with new ‘white glass’ primary façade material,” per a press release.

Jamestown bought 1250 Broadway in 2008, and while it doesn’t have the stereotypically pre-war aesthetic of other tech-y buildings — like Chelsea Market, soon to undergo a major expansion — it has still attracted a fair number of firms, showing that a prime location on Silicon Alley and a dearth of older buildings with affordable rents will lead to companies stepping outside of their comfort zone.

Varonis Systems just tripled their space for a total of 46,000 square feet over three floors, while Rocket Fuel and Piksel, among others, also count themselves as tenants.

The renovation of 1250 Broadway should wrap up in the fall. The new design is by Moed de Armas & Shannon Architects, who are also heading up the redesign of nearby Herald Center at 1293 Broadway.