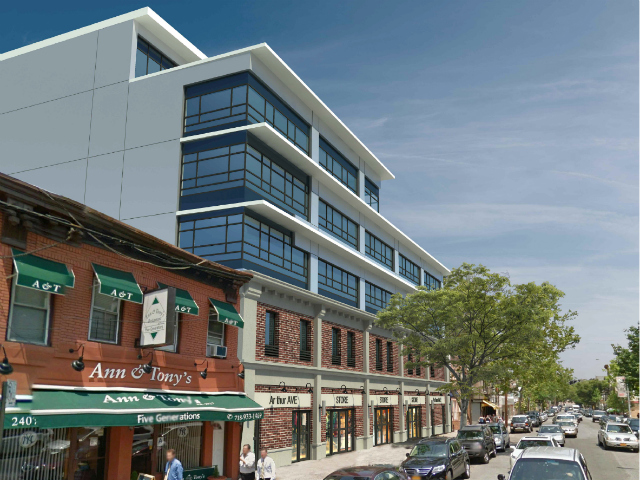 It will cater to students at Fordham University, Bayside-based developer AB Capstone told YIMBY, though it will not be officially affiliated with the school, and will also accept those studying elsewhere. Because the city zoning code considers student housing to be a community facility, the developer is allowed to build to a density beyond what’s normally allowed in an R6 district.

The building will feature a two-story, 7,500-square foot brick retail base, which will fit in with other shops along Arthur Avenue. Stores on Arthur Avenue and nearby East 187th Street have retained their Italian flavor, and remain the Bronx equivalent of Little Italy. (This includes the departure of actual Italians – the neighborhood’s residential population is now more Puerto Rican and Albanian.)

Above the two-story retail base will rise a more modern, glassy space, with the 64 student apartments. They’ll be spread over 31,101 square feet of residential floor area, yielding small units typical of college dormitories.

Demolition of the existing low-slung commercial structures will begin next month, the developer said, with completion of the student housing project slated for the summer of 2015.

Permits Filed for 3217 Westchester Avenue in Pelham Bay, The Bronx

Permits Filed for 2164 Hughes Avenue in Belmont, The Bronx