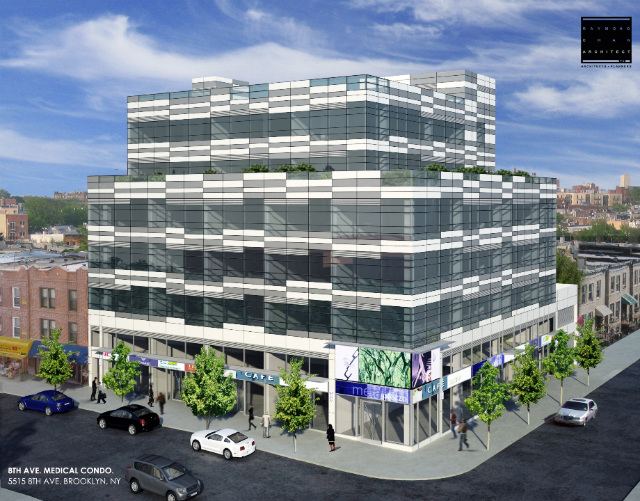 Eighth Avenue has long been a main commercial street in Sunset Park, with its storefronts supplying the surrounding residential sidestreets with local retail. But in recent decades, it’s become the main drag for one of New York City’s two largest Chinatowns (the other being Flushing, in Queens; the Manhattan original is now third), and has subsequently acquired a commensurate demand for commercial space.

Medical space is easiest to build, given its preferential status in the zoning code. Builders of walk-in health centers are afforded generous density bonuses, which are put to good use in ethnic business districts throughout the city.

Sunset Park is a natural destination for medical development, and YIMBY has obtained a rendering for a glassy new medical complex at 5515 Eighth Avenue. The six-story structure, designed by Raymond Chan, will replace a single-story structure at the corner of 56th Street.

Architecture beyond the gentrifying fringe in New York City can sometimes be subpar, but commercial projects, as everywhere else, tend to be higher quality than residential developments. This building, with its glassy façade and simple white and gray panels between floors, looks to follow the same rule.

The ground floor and mezzanine will contain 13,000 square feet of retail space, topped by 42,500 square feet of medical office condos. The three-level underground parking garage will have enough space for around 150 cars, far more than required by code.

The developer is Andy Wong with Flushing-based Golden 8th Avenue Realty Corp., a firm that appears to have owned the land since the 1980s.

The total project cost was projected to be around $33 million, with $8 million in EB-5 funding, from Chinese seeking green cards in exchange for making $500,000 in job-creating investments in the U.S.

While the project does overwhelm its surroundings – three-story basic brick apartment buildings with ground level retail on Eighth Avenue – the community long ago grew too large for its century-old housing stock, and buildings of six stories and more are perfectly appropriate.

Medical space can be easily built, as this project shows, but housing is not granted such generous zoning provisions. Ideally, Eighth Avenue would be sprouting apartment buildings that are as big as the walk-in health centers – and if this were the case, then perhaps Sunset Park would not be so much less affordable than its Hasidic neighbor, Borough Park.

Construction of 5515 Eighth Avenue was slated to start in September 2014, and a flurry of permit filings confirms this likely did occur. The building is planned to open to tenants in three years.