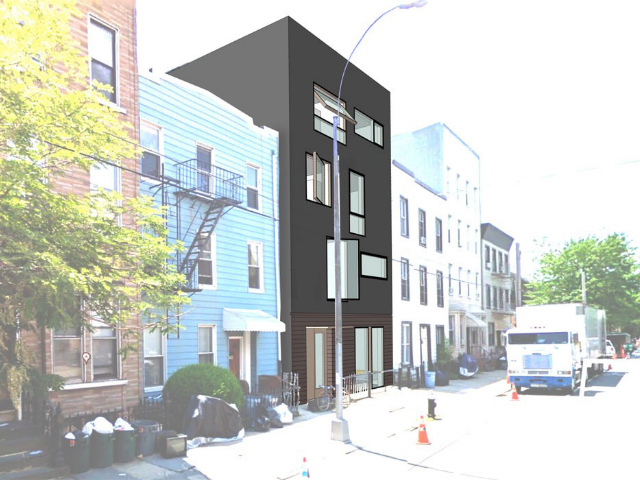 Loadingdock5 is quickly becoming a fixture around Brooklyn, as the architect of choice for Hello Living and designer of a few passive house projects.

Now, they’re building a home for themselves – literally. The Loadingdock5 team is self-funding and building a small passive house apartment building in Greenpoint, which they plan to live in. The project is being built along the lines of a “Baugruppe” – a popular cooperating housing arrangement, especially among architects, in German-speaking countries. (Werner Morath and Sam Bargetz, the leaders of Loadingdock5, both studied architecture in Vienna.)

The team describes 152 Freeman Street, which they call “Haus,” thusly on their website:

The major design challenge of this project is to prove that a Passivhaus in NYC can be built for comparatively little money – even more so than our existing PH projects, which have very reasonable construction costs but the owners opted to invest in high-end fixtures and appliances.

Haus will instead be a true Every Man experiment, and a good gauge of how reasonable it is to expect that even people
with very modest budgets can build a Passive House.

Construction itself is underway, but the project was delayed, Sam Bargetz told YIMBY in August, because of the Department of Buildings.

“We were ready to build last year in the spring, but the DOB did an energy audit,” he told us – an odd decision for a building that aspires to use next to no energy. “The energy audit lasted until September [of 2013], and we lost a whole year.” The new building permit application was filed in May of 2011, but wasn’t granted until June 2013, according to city records.

The project – designed in typical boxy passive house style, with asymmetrical windows adding some interest to the front elevation – is being built on a standard 25-foot-wide lot, which the team picked up in 2011 for $655,000. At the time, it held a small two-story vinyl-faced building, which they demolished.

Haus will contain seven units, with one on the first floor and two each on the second through fourth levels. The apartments will be about 700 square feet apiece; the ground floor unit will have a private backyard garden, and the rest will share the rooftop.