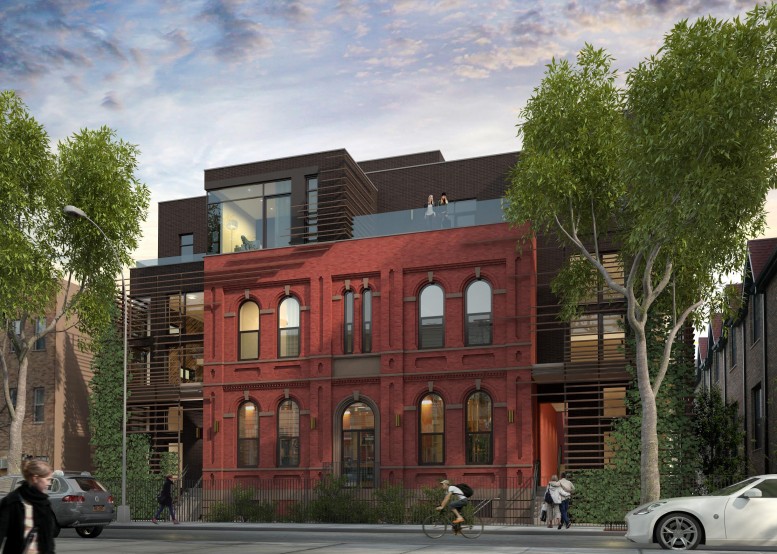 Last year, Curbed dug up a construction rendering that showed the future of 533 Leonard Street in Greenpoint, a 19th century school building being converted to condos. Now we have a better idea of what the redevelopment will look like, courtesy of developer Largo Investments.

Plans filed in 2010 call for 13 apartments spread across 19,940 square feet of residential space, for a spacious average unit of 1,533 square feet. The two-story building will also gain an extra floor, raising its roof line from 33 to 55 feet. Six duplexes will take up the cellar and first floor, followed by a mezzanine between the first and second floors, four apartments on the second floor, and two units on the third.

It looks like the penthouse apartments will have their own terraces, and the rest of the residents will have access to a communal roof deck. There will also be a 700-square-foot parking lot with four spaces. Designed by architect Robert Toscano, the building’s new look includes an addition and two new wings on either side, clad in dark brick and partially enclosed in wooden slats.

Constructed in 1888 as an elementary school, this red brick Italianate building was occupied by the Polish Legion of American Veterans beginning in 1947, according to Brooklyn Relics. The Legion sold the 10,000-square-foot property to an LLC for $2,300,000 in May 2010, and alteration applications were filed a few months later. Situated mid-block on Leonard between Nassau and Driggs Avenues, the revamped school will join a church converted to apartments next door, as well as a row of vinyl-covered rowhouses and some Italianate apartment buildings.

The DOB approved alteration permits last summer, and construction signage predicts that the project will be finished this fall.

Development is cropping up everywhere in the blocks just east of McCarren Park, from a six-story apartment building on Bayard Street to this off-beat conversion on Graham Avenue.