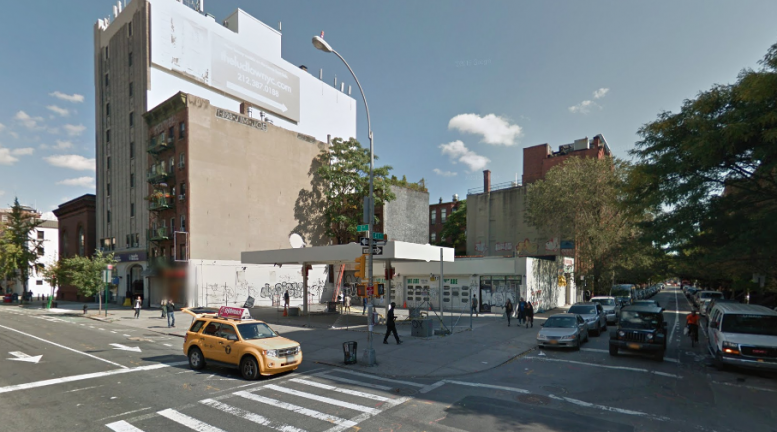 Applications have finally been filed to replace the East Village’s last gas station with condos at 24 Second Avenue, on the corner of First Street.

AORE Capital, headquartered a few blocks away on Bleecker Street, paid $32 million for the 80-foot-wide property last July, and now they’ve hired Dumbo-based RSVP Studio to design their new mixed-use building. The 10-story development will have 52,700 square feet of residential space and 6,000 square feet of retail spread between the cellar and first floor. There will be just 31 apartments, which works out to impressively sized units of 1,700 square feet a piece.

Apartments will begin on the second floor, with four to five units per floor through the sixth story. The seventh and eighth floors will host two duplexes, and the ninth and tenth floors will hold one penthouse duplex with a private roof deck. Amenities include a shared terrace and recreation space on the second floor, and a fitness room, storage and bike storage in the cellar.

Overall, the building will rise 120 feet into the air and span 58,724 square feet. No parking is included, because the city exempts most developments in Lower Manhattan from parking requirements.

YIMBY noticed this rendering for the project on the website for mortgage lender Ladder Capital, who provided a bridge loan for the development. We’re not sure whether it’s up to date, because it appears to only shows eight stories, not 10. Demolition applications were filed back in October to take down the gas station, but they haven’t been approved.

The two other remaining gas stations in the East Village, both on Houston Street, are also set to bite the dust. One on the corner of Avenue C will become a 10-story, 46 unit rental building with ground floor retail, and a glassy, $200 million residential project designed by Cook+Fox is planned for the BP station at 300 Lafayette Street.