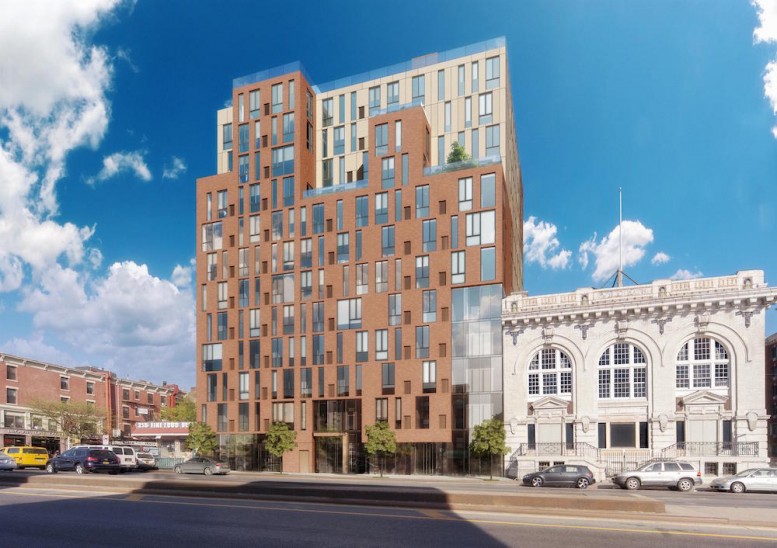 Daniel Goldner Architects will design the building, which will rise between Union and President Streets, directly in front of an entrance to the Union Street R train stop. The development will hold 68 units spread across 61,572 square feet, for an average apartment of 879 square feet. The ground floor will have 3,500 square feet of retail.

The building’s retail will help activate the streetscape of car-heavy Fourth Avenue, thanks to zoning that requires retail or community uses and forbids parking on the first floors of new buildings. And this project doesn’t have to include parking, because the lot is small enough to be exempt from the city’s requirements.

Design-wise, the structure will stick to the modern aesthetic set by other new buildings on Fourth Avenue, but the long, unevenly distributed strips of windows give it a slightly more distinctive look. Light brick and white facade panels will coat the exterior. The top four floors will be set back, creating large balconies for residents on the eighth and ninth floors.

Permits were first filed back in 2008, but the recession likely killed the project. Afterwards, Eric Richmond, who owned the Lyceum and 225 4th Avenue, fell behind on mortgage payments and slid into foreclosure in 2013. Richmond bought the landmarked, 1908 bathhouse in 1994 and transformed it into an event space that hosted community and cultural events.

Greystone then purchased the building for $7,600,000 at a foreclosure auction last October. While they had initially planned to convert the Lyceum to condos, the developer decided late last month to make it into a “single-use commercial structure.”

The Midtown West-based firm hasn’t revealed what will fill the two-story building, but we could imagine it as a gym, a grocery store or a theater. With any luck, it will house a cultural tenant that fits its attractive neo-Renaissance facade.

The DOB issued new building permits in May, and construction is expected to wrap in late 2016 or early 2017.