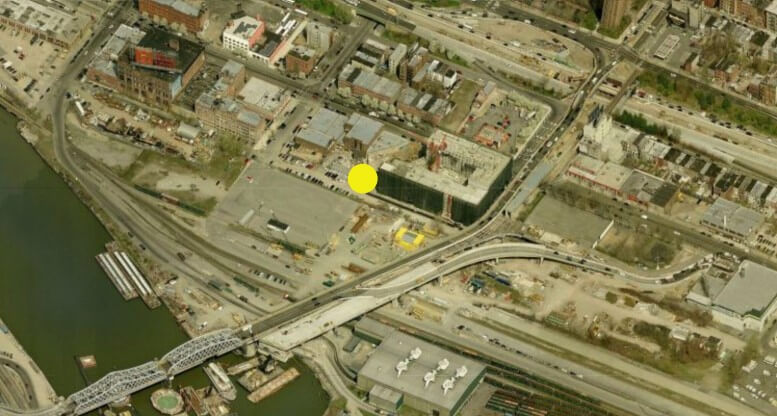 The only other buildings of this scale in the neighborhood are large public housing complexes built in the 1950s, or heavily subsidized affordable developments slightly further north in Melrose and Concourse Village. If JCAL’s project is successful, investors will likely start taking more risks on new market-rate or 80/20 projects in the South Bronx.

329 East 132nd will reach 120 feet into the air and hold 91 apartments. They’ll be spread across 58,106 square feet of residential space, yielding fairly small average units of 638 square feet. Apartments will begin on the second floor, with 10 units per story through the eighth floor, and then fewer units on the upper floors—six each on the ninth and 10th floors, five on the 11th, and just four on the 12th floor.

And the building will have attractive amenities, including a roof deck, lounge, outdoor recreation area, gym, and storage space for 46 bikes. There will also be outdoor parking for 37 cars, which is exactly the amount required by the property’s fairly generous R8A zoning.

Aufgang Architects will design the project, after working with JCAL on a six-story affordable development under construction in Highbridge.

A low-income rental complex, Bruckner by the Bridge, opened four years ago on the eastern edge of the block, facing Willis Avenue between Bruckner Boulevard and East 132nd Street. Back in 2011, studios at the 12-story, 419-unit development rented for $710 a month, and two-bedrooms went for $979.

JCAL’s unusually shaped parcel sits across the street from a forlorn swath of industrial waterfront owned by the city’s Department of Transportation. But the New York Restoration Project hopes to transform the empty pier into an attractive park, as part of an ambitious initiative called “The Haven Project.” They want to create green recreation space and a safe link to Randall’s Island, which is visible just across the narrow Bronx Kill.

The Parks Department has already revamped a little foot bridge constructed as part of the Hell Gate Bridge complex. The bridge, along with the new Randall’s Island Connector, will open later this summer and offer a new link between the island and the Bronx.