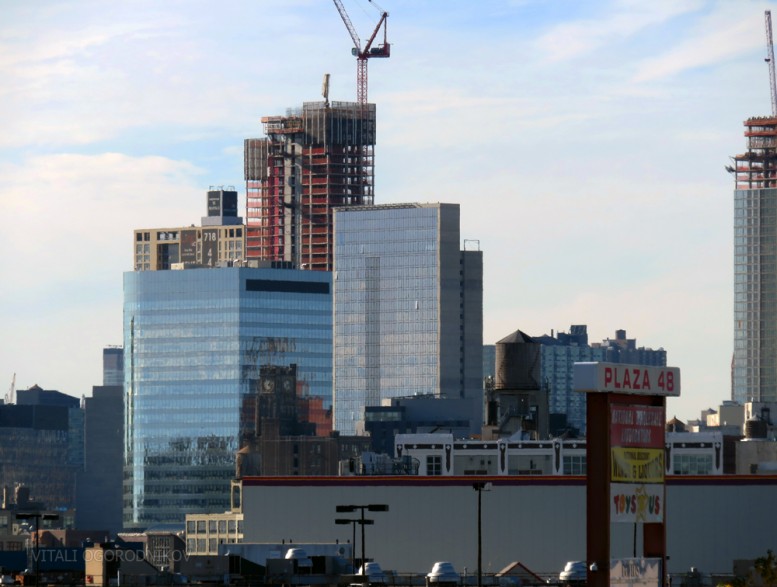 The LIC Marriott and Residential Tower at 29-07 Queens Plaza North is effectively complete on the exterior, and the last glass panes have now been installed on its eastern facing facade. At 31 stories tall, it is now among the five tallest topped-out buildings in central Long Island City. The mixed-use project is the tallest hotel building in Queens, though the top of the building is occupied by 135 residences. Their combined area of 107,007 square feet results in rather modestly sized apartments averaging 792 square feet. 72,281 square feet on the lower floors house the hotel portion, and its 160 rooms also make it one of the city’s largest hospitality establishments outside of Manhattan. The tower became the fifth significant skyscraper in the Court Square district by early 2015 when it caught up to Purves I a few blocks to the south, which topped-out a short while earlier. It is currently the borough’s tallest building north of Queens Plaza, and although its height is rather modest by the city’s lofty standards, it is prominent enough to be visible from Manhattan’s street canyons. The building stands on an irregularly shaped block bound by Dutch Kills Green – a green space reclaimed from a parking lot in 2012 – along with 41st Street, 29th Street, and Queens Plaza North, all at odd angles in relation to one another. Like the rest of the buildings on the block, the project occupies an irregular lot, which has a floor-to-area ratio of 12. A low-rise base occupies the entirety of the site, facing the park to the east and 29th street to the west. The tower slab is aligned with 29th Street, though its subtly irregular shape pays homage to the site’s form. The design exudes a minimalist character, achieved by fusing Modernist and Brutalist aesthetics. Sheer glass curtain walls make up the east and west facades of the tower, offering floor-to-ceiling views of Manhattan, Long Island City, and the Queens neighborhoods that lie across the Sunnyside Railyard to the east.

Thin mullions between window units create a muted grid on the glass surface, interrupted only by a tall, angled niche on the east side. Large, operable window panes are seen on the flat façade. The reflective curtain wall seamlessly conceals the east-facing core during daytime, but it remains to be seen whether a dark vertical band of un-illuminated windows will be noticeable at night. A common feature of high-rise hotels are blank side walls, which may become a problem if these walls are not obscured by neighboring structures. Since the hotel tower is freestanding, the architects’ solution was interpreting them as a set of double bands of heavy concrete that rise at the north and south sides of the tower and cap the building at the top. Their varying heights, the windowed niche in-between, and the acute angle on the taller band create a distinctly sculptural effect. The weakest part of the design is the base. High quality concrete is used for its pattern of rectangular, Brutalist niches, yet these are completely windowless, alternating between concrete panels and mechanical grills. The resulting street presence is somewhat oppressive. On the positive side, the base follows the street wall and its eastern exposure will be largely concealed by the green canopies of the Dutch Kills Green park across the street. The south and east edges of the park are framed by one of the busiest intersections in the city, where Northern Boulevard, Queens Boulevard, and Jackson Avenue converge with the main traffic lanes of the Queensboro Bridge, while two elevated subway lines meet above. The park provides a buffer from the chaos of traffic and train noise. On the other hand, the busy location is ideal for a hotel. A large swath of Long Island City north of Queens Plaza has become a haven for new hotel construction over the past decade. Among this group, the new Marriott provides the most direct access to Manhattan and the rest of Queens, and its position makes for a commanding presence at the borough’s most important gateway into Manhattan.