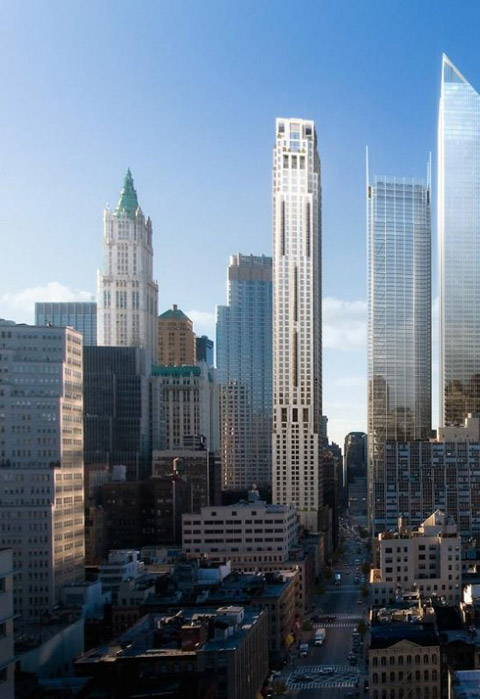 New permits have been filed for construction at 30 Park Place, and if Silverstein’s words on the site from earlier this year are still valid, construction is about to begin. With plans officially approved, the 937-foot and 67-floor tower can finally begin rising; the site has sat as a vacant concrete pit since the 2008 financial crises derailed the original plans, which have only seen slight alterations in the past five years.

30 Park Place was designed by Stern, and will be the architect’s tallest New York tower to date – and the tallest residential building in Lower Manhattan. The bottom of the building will be occupied by a Four Seasons Hotel, while the top will be residences; permits indicate the hotel will have 149 rooms, while the upper floors will hold 161 units.

Lower Manhattan is following the island-wide trend for extremely tall residential towers, though 30 Park Place was proposed long before the majority of Midtown’s future supertalls. The tower will rise concurrently with the Herzog & de Meuron-designed 56 Leonard Street, which was also stalled for several years, only resuming construction in early 2013. Other skyline-piercing towers set to rise in the vicinity include the newly-announced 22 Thames Street by Vinoly, and 80 South Street, by Morali Architects. 30 Park Place, stalled this past summer