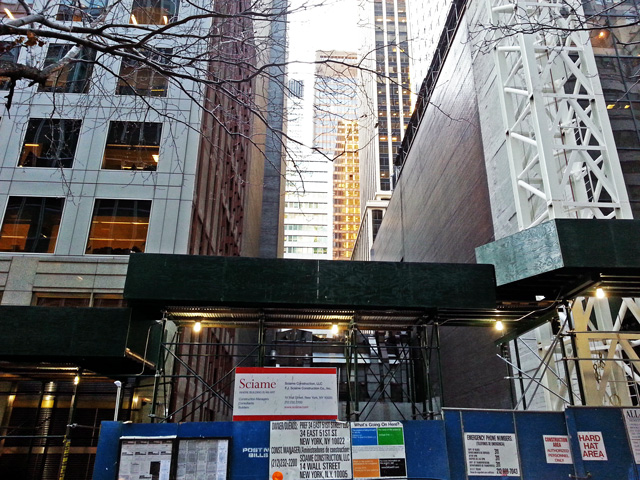 Construction is about to move above ground level at 34 East 51st Street, which will soon be a 21-story office building with almost 60,000 square feet of space. The developer is Sedesco, and the architect is SOM.

Though no designs have been made public, zoning diagrams are on-file with the Department of Buildings, and depict a fairly typical layout; the building’s lower levels will meet the street-wall, and a series of staggered setbacks will characterize the upper levels. As is typical with new office construction, the ceiling heights will be impressive, and 34 East 51st Street will stand 296 feet tall. New office buildings in Midtown tend towards enormous, so the development of 34 East 51st Street is quite a departure for the neighborhood. The site is in the area that will be up-zoned in accordance with the Midtown East re-zoning, which will likely pass under the de Blasio administration; given the project’s location on a side-street, it would not have been able to take advantage of any additional development rights.

With foundations complete, the superstructure for 34 East 51st Street should be going vertical shortly, and completion is expected in January of 2015.