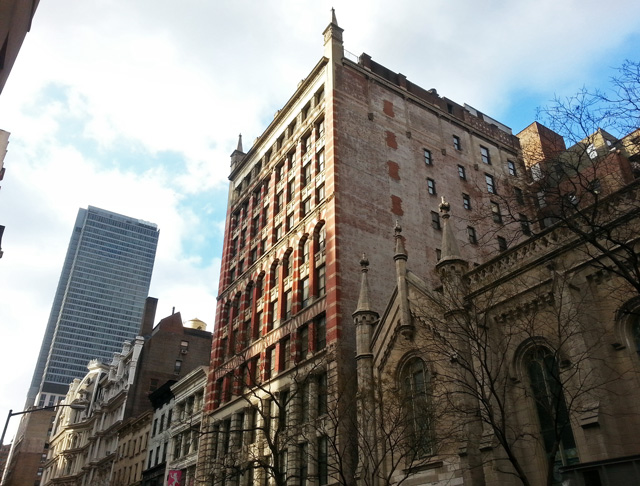 The green fencing of doom has risen around the base of 3 West 29th Street, which will be torn down to make way for a mixed-use development by HFZ Capital. The Real Deal reported on the building’s impending demolition last week, which will vanish along with adjacent structures at 11 West 29th Street and 8 West 30th Street.

While YIMBY supports new development, the existing 3 West 29th Street — aka The Bancroft Building, which was built in 1896 — is one of the best remaining examples of nineteenth century New York City in the neighborhood. The facade’s brickwork is remarkable, and the structure adds significantly to NoMAD’s character. Demolishing the interiors would be one thing, but the facade merits preservation. The adjacent structures will be no great loss, but The Bancroft Building is a definite gem, and — if anything — integrating its brickwork into the future skyscraper would boost potential pricing. Projects like the Hearst Tower and 111 West 57th Street prove that incorporating legacy buildings can be both aesthetically pleasing and cost-effective, and it often results in pricing premiums.

Plans for the future development are vague, though a massing diagram — via Curbed — outlines the site’s potential. With air rights totaling 350,000 square feet, the replacement will likely make a mark on the skyline.

Given NoMAD’s surging profile and cache, it is entirely possible that HFZ’s development will be aesthetically superior to The Bancroft Building; progress is not possible without sacrifice. The neighborhood is no stranger to change, and even The Empire State Building — located four blocks to the north — came at the cost of the old Waldorf Astoria. Regardless of sentiments for historic architecture, it does appear that 3 West 29th Street will be coming down. Permits confirm the green fencing of doom is here to stay, as demolition was approved on February 12th. While HFZ’s project will put the land to a higher and better use, it would still be nice the exterior of The Bancroft could remain. No completion date for the new building has been announced.