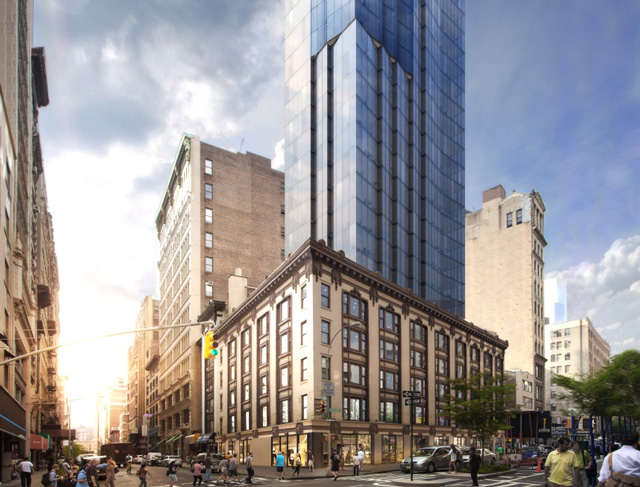 Renderings — created by Avoid Obvious — have been posted on Spector Group’s website for an elusive development that will rise at 1165 Broadway. The reveal comes with few additional details, but per Spector, the “current landmarked façade will be fully restored and act as the shell for a new modern mid-rise retail, residential, [and] mixed use [building].” 1165 Broadway has a long and troubled history, and the building was formerly a hub for illegal activities; indeed, the 1993 terrorist attack on the former World Trade Center was found to have been financed by counterfeiting that occurred inside.

A landmark legal decision in 1995 found that landlords can be held responsible for counterfeiting occurring within their buildings, resulting in the end of illegal activities at 1165 Broadway; the building has played a crucial role in the city’s history, and the site’s re-development will have to endure the Landmarks Preservation Commission — which is a good thing, considering the abundance of banal projects rising to the west. The conversion and redevelopment of 1165 Broadway closes yet another chapter of NoMAD’s nefarious past. While the wig, perfume, and handbag shops have been disappearing since the late 2000’s, the transformation of the neighborhood’s former lynchpin of illegality is yet another signal that NoMAD has come full circle.

Preserving NoMAD’s history has not exactly been a priority, as developments like 3 West 29th Street make clear, but integrating the neighborhood’s past into modern-day projects will be beneficial to its future character, as it does have many excellent examples of pre-war architecture. While the existing 1165 Broadway is no show-stopper, the contrast between the future tower and its podium will enhance the project’s appearance. No completion date for 1165 Broadway — or architect, for that matter — has been announced.