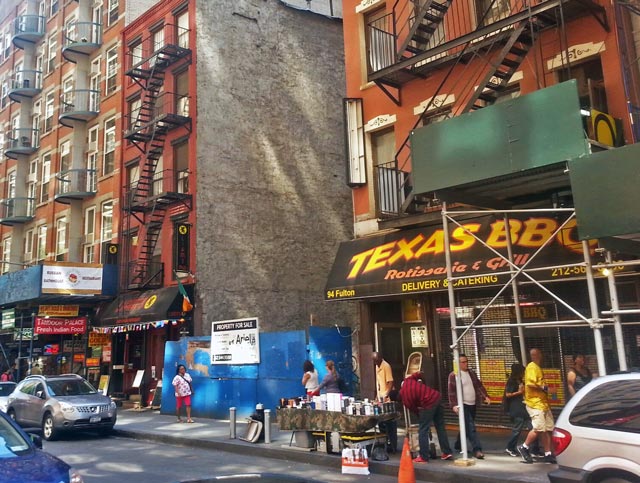 92 Fulton Street traded hands for $10 million earlier this week, and Fisher Brothers’ latest acquisition already has a set of new permits; a recent proposal included the parcel in the assemblage for a larger tower, but evidently those plans are now defunct. Curtis + Ginsberg is listed as the architect of record.

The new filings indicate 92 Fulton Street will stand 16 floors and 147 feet to its pinnacle. Besides the 650 square feet of ground-floor retail, the building will have 17,870 square feet of residential space, split between ten units. Condominiums would seem likely, though ceiling heights will apparently be low. Old rendering of 92 Fulton, via DBRDS

Plans for a smaller 92 Fulton Street are somewhat surprising considering the potential for a larger assemblage, though the ’boutique’ market in the Financial District is certainly thriving. Curtis + Ginsberg’s work is typically simple and brick, which would be quite the departure from conceptual schemes for the site. The project’s location would be a hard sell for anything cutting-edge, though another firm could be the design architect.

Despite the neighborhood’s current disadvantages, the opening of both the Calatrava Hub and Fulton Center will dramatically improve surrounds, as transit is about to become much more accessible. Given its proximity to eleven different subway lines, the submitted scope for 92 Fulton Street — which would have an FAR of 8.2 — is incredibly low, and zoning prohibits density that would fully realize the site’s potential.

Nearby, 112-118 Fulton Street is also about to rise; that site traded hands this week, with Carmel Partners set to buy from The Lightstone Group for over $170 million. The corridor is booming, and demand for new residential is clearly there, which is why restrictions on residential development in the Financial District do not make sense.

No completion date has been announced, but the site is almost ready for construction; pending DOB approval, a 2016 estimate would be reasonable.