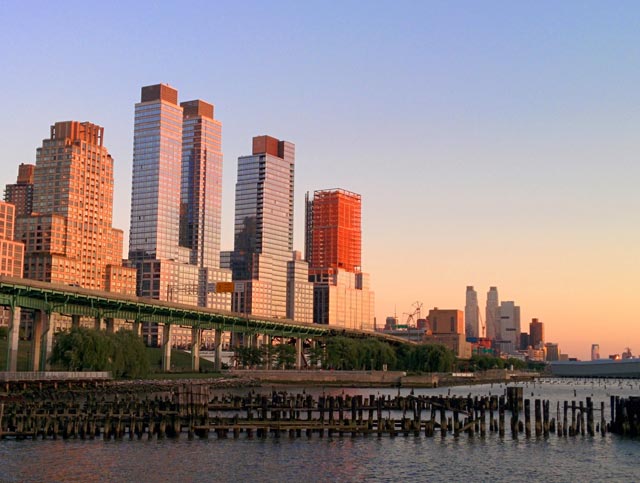 Construction has made major headway at 40 Riverside Boulevard on the Upper West Side, which has now topped-out. Extell is the site’s developer, and Goldstein Hill & West is the architect of record. Permits reveal a total scope of 527,350 square feet, which will be mostly residential, divided amongst 274 apartments. 40 Riverside Boulevard will also include a 7,846 square foot commercial component and 2,926 square feet of community facility space; the tower stands 345 feet tall. With cladding now rising, the project’s appearance continues to evolve, though it should be relatively attractive; larger buildings stand to the north — and will soon rise to the south — relegating 40 Riverside Boulevard to ‘filler’ status. Its location guarantees permanent visibility on the overall skyline when viewed from New Jersey, but eye-catching structures like Durst’s 625 West 57th Street will become focal points, drawing attention away from the 33-story tower. While 40 Riverside Boulevard will complete the ‘Riverside South’ development initially begun by Trump, the site abuts the ‘Riverside Center‘ project, where construction is just beginning. As growth continues, new development will continue to transform a formerly barren location into a vibrant, walkable, and desirable neighborhood, bringing the southwest corner of the Upper West Side to its full potential. Completion of 40 Riverside Boulevard is expected in 2015.