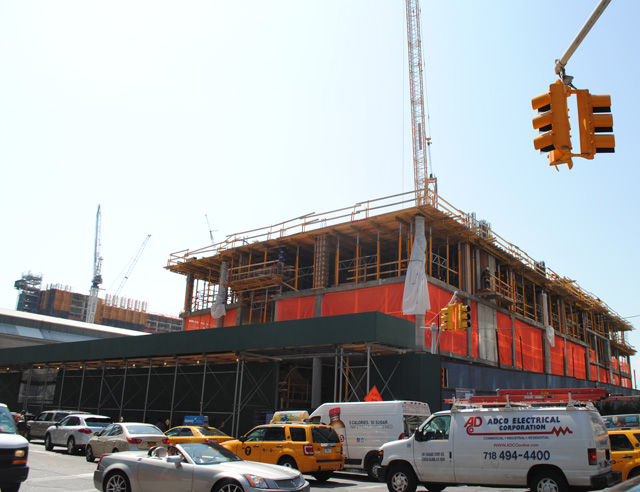 The Dermot Company’s 21 West End Avenue has just started rising above the ground, as YIMBY saw when we visited the site last week. The building, now just three stories, will eventually rise to 43, and will contain 616 rental apartments.

Developed as a joint venture with the AFL-CIO Building Investment Trust, the tower will contain a four-story school (pre-kindergarten through eighth grade) in its base, and the apartments will include some three-bedroom units.

“In addition to being a prudent investment for the BIT,” an investment advisor for the union said, “21 West End Avenue will create over 2,000 jobs for the skilled men and women of the New York Building Trades.

The main section of the SLCE-designed building will feature a glass curtain wall, which sits adjacent to the base; the lower component will be defined by windows broken up into irregularly placed squares and rectangles, and at the highest point, it yields to the glassy facade after about twenty floors.

The development is part of a building boomlet all around Lincoln Square and the lower part of the Upper West Side, and will come on the market at about the same time as a Glenwood Management building down the street that YIMBY checked out last week, at 175 West 60th Street.

Talk about 21 West End Avenue on the YIMBY Forums