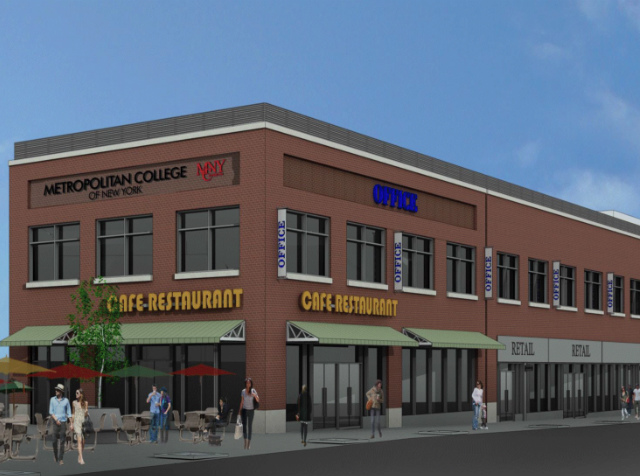 The Hub — in the Bronx, and the closest thing the borough has to a downtown — is in the midst of a big box boom.

The latest project to rise is Triangle Plaza Hub, at Bergen Avenue and 149th Street. The building is being developed by Triangle Equities, which specializes in government-assisted commercial projects (but has been known to dabble in residential as well).

Currently under construction, the commercial complex will be home to a Fine Fare supermarket and Boston Market. The grocery store and restaurant will also be joined by the Metropolitan College of New York, which is relocating its campus to the building, as well as a Vistasite Eye Care center. The retail space is being built on the site of a former municipal parking lot, bringing a more appropriate use to the densely-populated Melrose section of the South Bronx. When completed, the building will house 80,000 square feet of commercial and community space.

The project is being developed in conjunction with the city’s Economic Development Corporation (along with a whole slew of acronymed agencies, as is Triangle Equities’ specialty). It will take advantage of the city’s Food Retail Expansion to Support Health (FRESH) initiative, which aims to bring fresh food to neighborhoods underserved by grocery stores by offering tax and zoning breaks to builders.

Permits Filed for 1351 Jerome Avenue in Mount Eden, The Bronx

Permits Filed for 950 Ogden Avenue in Highbridge, The Bronx