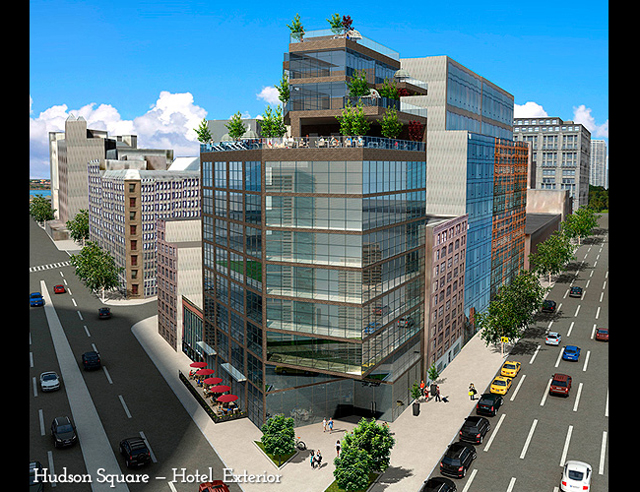 219 Hudson Street [Tribeca Citizen]: Dubbed Hudson Square Hotel, Rafi Gibly is developing an 11-story and 50-60-room hotel and penthouse building — of 30,000 square feet — at the vacant lot of 219 Hudson Street, in Hudson Square; no permits have been filed, but “they expect the hotel to open by early 2016.”

245 East 36th Street [The Real Deal]: Perlbinder Realty has received its third four-year extension for their planned 34-story, mixed-use high-rise at the vacant lot of 245 East 36th Street, in Murray Hill; the site has been in the works since 2002, and groundbreaking has yet to commence.

242 West 53rd Street [DNAinfo New York]: The two-story Roseland Ballroom — at 242 West 53rd Street, in the Theater District — is currently being demolished from the inside, out; Algin Management has filed for a 62-story and 426-unit mixed-use tower as a replacement, and CetraRuddy is designing.

361 Central Park West [West Side Rag]: 361 Central Park West — a multi-story church, on the Upper West Side — is currently undergoing asbestos removal, possibly to quicken its redevelopment into residential; most recently, owner Joseph Brunner had apparently been looking to flip the site.

330 Throop Avenue [Brownstoner]: Demolition of 330 Throop Avenue’s three-story wood-framed building — in Bedford-Stuyvesant — is currently underway, and the site is now awaiting debris removal; applications were filed this summer for a four-story and eight-unit residential building.