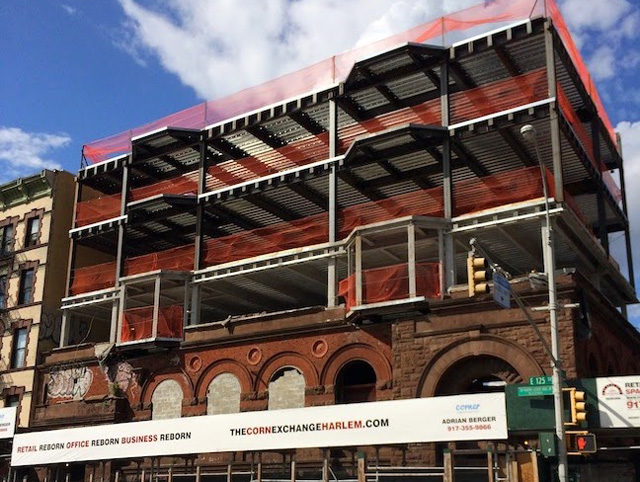 81 East 125th Street [Harlem+Bespoke]: Steel framing has made quick progress at 81 East 125th Street — in East Harlem — where the Corn Exchange Building is being reconstructed to seven stories; the first five floors have been built-out. Offices will eventually occupy the upper floors, while retail space will span 8,200 square feet on the first two levels.

42-14 Crescent Street [The Court Square Blog]: Demolition of the two-story structure at 42-14 Crescent Street, in Long Island City, is imminent; Meadow Partners will soon begin construction of a 13-story and 48-unit apartment building, previously revealed by YIMBY in July. Sidewalk shedding and scaffolding are up around the perimeter.

594 Dean Street [Brownstoner]: After being forced out of 542 Atlantic Avenue to make way for redevelopment, the Boerum Hill Post Office will be moving into a two-story warehouse being converted to retail and community use at 594 Dean Street, in Prospect Heights. Renderings have been posted on-site, and the building is set to span roughly 25,000 square feet, per alteration permits.

570 Fulton Street [Crain’s New York]: A three-story office building at 570 Fulton Street — in Fort Greene — is set to hit the market as a development site, potentially selling for more than $25 million. The lot is zoned for a “residential, commercial, or a hotel development,” and the building potential amounts to 86,000 square feet, including zoning bonuses.

Queens Hospital Center Expansion [Queens Courier]: Construction recently began on a two-story and 13,000 square-foot emergency room at Queens Hospital Center on Goethals Avenue, in Hillcrest. The expansion is being built on a previously vacant spot, and the façade will be “made of glass, metal and concrete.”

32 Avenue C [EV Grieve]: Three low-rise structures — spanning 26-32 Avenue C, in the East Village — are likely to be demolished. Due to the buildings’ states of disrepair, the city asked the occupants to vacate the structures in 2012.

424 West 33rd Street [Real Estate Weekly]: The 13-story and 200,000 square-foot building at 424 West 33rd Street — in Chelsea — has been targeted by Brookfield, which controls the rest of the block for their Manhattan West development. The owner of the building has stated “Brookfield hasn’t made an offer that we found acceptable.” If acquired, razing the building “would create enough space for a fourth tower to replace the low-rise” Brookfield is currently planning next to the structure.

149 1st Avenue [EV Grieve]: The five-story tenement at 149 1st Avenue — in the East Village — is being vacated to make way for demolition; reportedly, “the building has serious deterioration issues.” Recent filings include multiple renovations, but demolition permits are currently lacking.