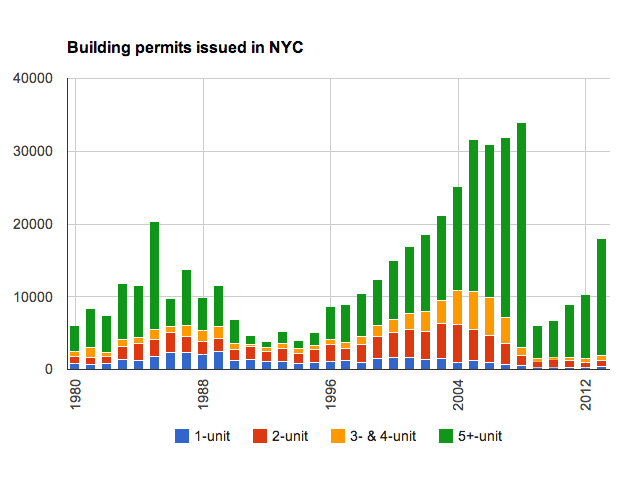 Based on data from the United States Census Bureau

For the nation’s hottest housing market, the number of building permits being handed out in New York City is pathetic. While permits issued in other major U.S. cities have rebounded since the recession, the Wall Street Journal reported last night, in some cases exceeding pre-crash peaks, New York’s numbers still have quite a bit of recovering to do. In 2013, just under 18,000 units were approved for construction, compared to a 2008 peak of nearly 34,000. The last time the city approved so little new housing was in 2002, when the market was still feeling the effects of the September 11th attacks.

While housing experts have cited all manner of reasons for the lackluster numbers – high land costs, high construction costs, overuse of landmarking – you have to travel far beyond the gentrifying fringe to find the real reason.

Put simply: New York City’s small builders have been nearly eradicated. The segment of the market that normally produces about half the city’s new building stock has all but vanished.

Smaller projects, on the other hand, have almost entirely disappeared. Just 1,869 units in one- through four-family projects were approved in 2013 – not many more than the 1,569 that were okayed in 2009, at the low point of the recession.

To put that into perspective, back when the market could last sustain the amount of construction we’re currently seeing in buildings with five or more units, permits for more than 10,000 smaller buildings were issued. If the city saw that much small construction activity today, we’d be nearly back at our pre-crash peak.

But instead, the past few years have been the worst for small builders since 1980, which is the first year for which I could find data.

Information about New York City’s small homebuilders is difficult to find, as all the big money and lobbying groups focus almost exclusively on medium- and large-scale projects. But after speaking with a few people in the industry, YIMBY has three possible explanations for the slowdown among small builders.

Among them are still-depressed outer borough markets, the end of tax abatement programs for small buildings, and the relentless downzoning during the Bloomberg years of the sorts of neighborhoods where such small-scale development tends to occur.

The most obvious answer could be that the “outer, outer borough” markets – neighborhoods beyond the gentrifying fringe, on Staten Island and in the outer reaches of the outer boroughs, which are popular with upwardly-mobile immigrant groups – have yet to rebound quite like the core. It’s common knowledge that the ultra-luxury market was the first to bounce back, so perhaps prices in areas where builders are most likely to throw up two- and three-family homes just have yet to return. (Though during the slump that started with the 1989 market crash, small-scale new construction was the only housing type for which permits were still being filed.)

It can be hard to find price indices for these sorts of small buildings, but a casual glance at deeds for newly-built two- and three-family homes in certain neighborhoods on the edges of the city shows that prices have not fully rebounded.

Prices seem to have done a bit better in the Bronx, but our sample size is small. In 2007 and 2008, new two- and three-family homes in Wakefield, the city’s northernmost neighborhood, were trading in the mid- to low-$100s a foot, while in 2013 there were a few transactions for the same types of buildings at around $150 and $175.

Another factor that may have stunted small-scale new construction is the expiration of two different tax abatement programs. The 421-b program, which gave property tax breaks to owner-occupied one- and two-family homes (and some larger ones), lapsed in 2006 and was not renewed; the 421-a program, meanwhile, gave abatements to other buildings with a small number of units, but was axed entirely for structures with less than four units at the end of 2007. (Given that, for whatever reason, almost all sub-five-unit buildings in NYC are one-, two- and three-family homes, this effectively eliminated the abatement for the entire category.)

Smaller buildings in New York City have less of a property tax burden than larger buildings to begin with, so they could absorb the blow a bit more easily. But they will still ultimately end up being taxed at a higher rate (at least initially) than bigger apartment buildings, putting their developers at a competitive disadvantage, and perhaps accounting for some of the slowdown in permits. (Though it should again be noted that the slowdown in permits for smaller buildings predated the end of the abatements.)

Which brings us to the third possible culprit: the widespread downzoning of single-family neighborhoods during the Bloomberg years.

While Amanda Burden’s term as chief city planner may be remembered by most for the towers that sprung up on Manhattan’s West Side and the western edge of Brooklyn and Queens, more far-flung neighborhoods were more likely to see their development capacity fall, not rise, through “contextual” rezonings of low-density neighborhoods.

Single-family neighborhoods in places like eastern Queens – the majority of which was rezoned, usually downward – were seeing intense development pressure as they become more appealing to immigrants. The old-timers – mostly middle-class Italian, Irish and Jewish “white ethnics” – appealed to the Department of City Planning to restrict the redevelopment of one- and two-family homes into larger two- and three-family buildings (along with a smattering of small apartment buildings), and from the mid-2000s onwards, the city was happy to oblige.

The result is that many neighborhoods that were once full of redevelopment opportunities are now closed off to anything but the smallest of one- or two-family projects on vacant lots. This sort of redevelopment was largely banned after the implementation of the 1961 zoning code, but throughout her tenure Amanda Burden closed off the last few areas where it was still allowed.

Eastern Queens was perhaps the hardest hit. While the “Jamaica Plan” rezoning made room for mid- and high-rise development in the core of downtown Jamaica, neighborhoods around it were downzoned. The demand for high-density development in downtown Jamaica is still speculative, but the demand for smaller-scale infill in existing residential neighborhoods was very real. Hundreds, if not thousands, of these small buildings went up in and around Jamaica during the 2000s – catering to a diverse array of immigrants from China and the former Soviet Union, among other places – in areas that are no longer open to redevelopment.

What happened in and around Jamaica also happened elsewhere in eastern Queens, especially in the areas around Flushing seeing an influx of demand from Chinese and Koreans, and also in the outer reaches on the Bronx and Brooklyn and all throughout Staten Island.

In the northern Bronx, for example, Wakefield and Williamsbridge both saw similar downzonings. These areas were growing increasingly popular with small builders, who sold their two- and three-family structures to buyers with African, Latino and Albanian last names.

Small-scale construction of this type won’t win any design awards – the defining feature is often a Fedders or Friedrich air conditioning unit punched through a wall, positioned above a city-required garage.

Nor does this type of construction help the mayor’s headline “affordable housing” construction numbers, since these buildings do not participate in the 80/20 or inclusionary housing programs, and profit margins are not high enough to squeeze any below-market units out of them in the future.

But they are, nevertheless, the last bits of new construction aimed at the city’s squeezed middle-class. And while they might not officially count as “affordable housing,” the prices and rents are still eminently affordable to many middle-class New Yorkers – certainly compared with the new market-rate projects going up in Manhattan and in the gentrifying parts of Brooklyn and Queens, where rents for studio apartments start around $2,000 and one-bedrooms can be closer to $3,000.

The two- and three-family homes also tend to have relatively large apartments, almost always exceeding 1,000 square feet, compared with the cramped studios and one-bedrooms that predominate in rental projects in trendier areas.

One- through four-family buildings are not as sexy as supertall towers on 57th Street or sleek mid-rises in Park Slope, but they’re a vital part of New York City’s housing market. It’s deeply distressing that not only has the market almost completely vanished, but nobody in any position of power or influence appears to have even noticed.

Bill de Blasio’s housing team likely has their hands full with his affordable housing plan. But they must wake up to the problem among the city’s small-scale builders. It’s not a problem they created, but it is one they’ll have to solve if there’s any hope for moderating the stifling housing cost hikes that have buffeted New York in recent years.

1 Comment on "Where Have All of New York City’s Small Builders Gone?"