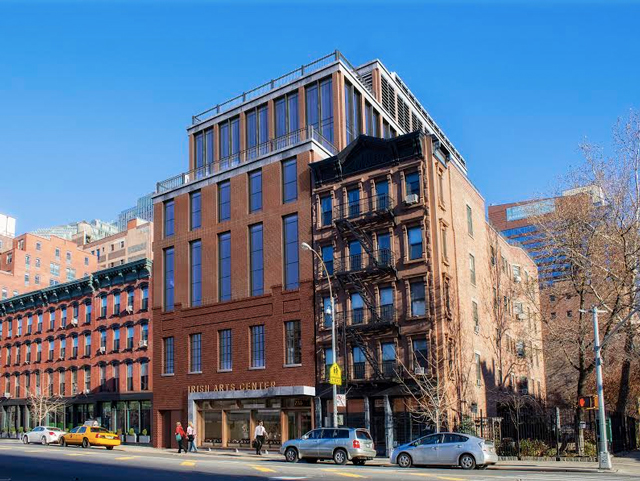 It’s been at least a generation since the Irish were a significant force in Hell’s Kitchen, but they’re making a comeback. For years the Irish Arts Center has operated out of a tenement on West 51st Street, but the group is upgrading its digs and expanding around the corner.

The Irish Arts Center will be building a new $54 million home for itself at 726 11th Avenue, between West 51st and 52nd Streets, to break ground in March 2015, according to a New York Times profile, with completion slated for the end of 2016. The center has shared renderings of the new project with YIMBY, depicting the façade during daylight. The new facility will consist of an L-shaped building with three parts – a five-story, 78-foot portion along 11th Avenue, a three-story, 35-foot section on West 51st Street, and a two-story structure connecting the two. The existing three-story building on West 51st will be retained, as will the façade of the existing two-story brick structure on 11th Avenue, last used as an auto body shop.

The new 40,000-square foot facility will include a 199-seat performing arts venue, rehearsal space and dressing areas, exhibition space for both visual arts and historical/cultural education exhibitions, classroom space, a dance studio, cafe, language lab and administration offices (got all that?). The IAC’s current building and the new site are both owned by the city. The architect of record is Davis Brody Bond, but the design was done by Ciaran O’Connor, the chief state architect for Ireland’s Office of Public Works. Of the $37.5 million that had been raised for the project when it was profiled in the Times, the lion’s share – $30 million – was donated by New York City, with the remainder coming from private gifts, the Irish government, and New York state.