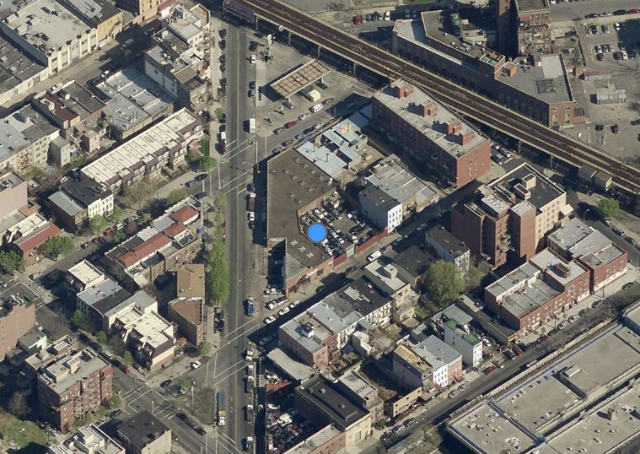 Yesterday, Aufgang Architects filed a permit for a new building by Adam America (one of two by the developer that day), at 120 Union Avenue in the Broadway Triangle. They plan to erect a 86,000-square foot building with nearly 70,000 square feet of apartments (there will be 96) and 1,750 square feet of retail space. The six-story, 70-foot-tall building will include 65 garage parking spaces, a bit more than required by zoning.

The area was rezoned in 2009 with the obvious (albeit unstated) intention of making way for more Hasidic development. The Satmar rebbes of South Williamsburg can deliver a lot of votes, and Giuliani and Bloomberg both listened to their calls for more room for growth. While the hipster parts of Williamsburg are tightly zoned, and are becoming more and more unaffordable by the day, the Hasids have managed to build themselves out of spiraling prices.

But gentrification has proceeded faster than its drafters perhaps expected, and Adam America is now in the enviable position of building housing for artisten under rules made for Hasids.

The most obvious benefit was the rezoning itself, which would likely not have been granted in East Williamsburg or Bushwick without affordable housing set-asides.

But there’s also the land’s tax status. Because the developers are building on land that politicians thought of as Hasidic, they’ll benefit from a tax deduction that wouldn’t be handed out for many projects north, east, south and west of here.

But the maps can be irrational and politicized. There’s obvious gerrymandering around Crown Heights, home to the Lubavitchers, and South Williamsburg, along with its spillover neighborhoods, like the Broadway Triangle, where Satmar adherents predominate. Unlike areas around them, they do not have to pay property taxes for a number of years. (Another absurdity is that you don’t get the tax abatement for building in East New York, which seems a cruel way to incentivize below-market development in neighborhoods where market rents are still so low.)