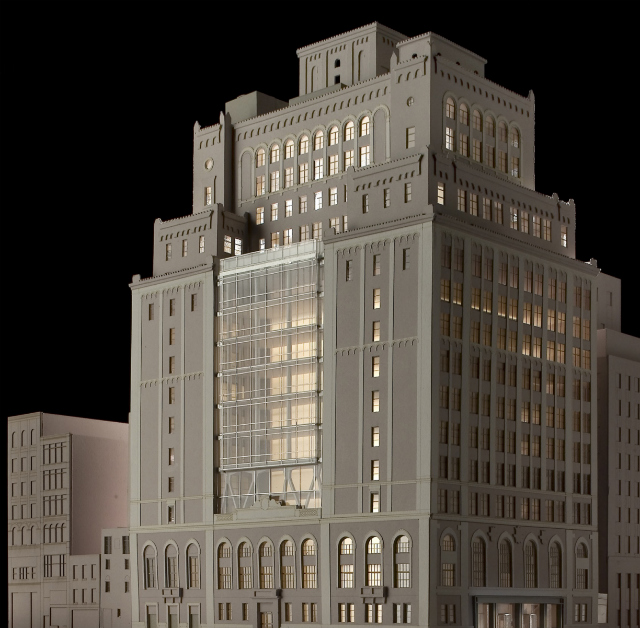 Baruch College’s Lawrence and Eris Field Building at 17 Lexington Avenue is a handsome enough prewar structure, but the 23rd Street façade looks like a bit of an afterthought. The twin faces that rise straight up from the sidewalk, flanking the taller portion in the center, have only a narrow line of windows in the middle.

Aside from the thin vertical line of windows and a bit of simple brickwork, the part of the building fronting 23rd Street looks almost like it was built up against a lot line, with the developer believing that it would one day be covered by an adjacent building. Except rather than a lot line that will eventually be bricked over, it’s overlooking a major crosstown corridor.

About a decade ago, there was a proposal to cover the middle part of the 23rd Street face in a glass wedge (rendering below), adding a bit of variety and perhaps distracting from the barren brick wall. An older plan for 17 Lexington Avenue, by Davis Brody Bond

That plan for the City University of New York building seems to have fallen by the wayside. But a more restrained renovation by the same architect – Davis Brody Bond – started two years ago, and is set to wrap up in 2017, according to a timeline posted on Baruch’s website. The renovation is made possible by a $30 million capital grant included earlier this year in the state’s fiscal year 2015 budget.

The most visible part of the renovation is a new glass enclosure for the indented space on 23rd Street. Unlike the earlier proposal, the one going forward will leave the prewar details on the base of the building untouched, instead rising inside the setback area. At least one version of the makeover included enlarged windows on the mostly blank faces, however some renderings do not show these, and we’re not sure if they made it into the final plans. The work will also include the installation of a central air conditioning system, allowing CUNY to remove the noisy, unsightly, energy inefficient window units. The elevators will be replaced, the building will be brought up to ADA accessibility standards, and all work will proceed without closing the building. LEED Silver certification is the goal.