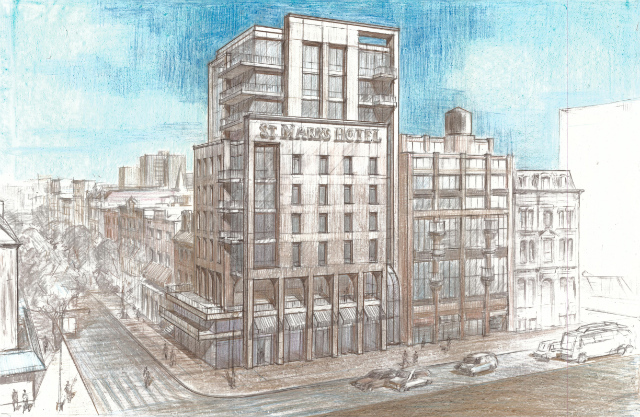 There were no permits filed yesterday, with the whole municipal apparatus off work for election day. But the Department of Buildings caught up this morning on filings, and left us with a big one: a 10-story hotel planned for Cooper Square.

At 71 Cooper Square, also known as 2 St. Mark’s Place, a 68-key hotel would replace the current four-story walk-up that houses the St. Mark’s Hotel, according to a new building permit application filed this morning and a drawing obtained by YIMBY.

The hotel is being redeveloped by owner John Pappas, who also owns the Park Savoy Hotel on West 58th Street. They’ve hired Z Architecture, headed by Alexander Zhitnik, to do the design.

The Schedule A filing indicates that the building would have a medical office space in the cellar, with retail space and a lobby on the ground level, topped by 10 hotel rooms on each of the floors between the third and the sixth, and seven rooms per floor above that. The building will feature a number of outdoor spaces, including balconies and a seventh-floor rooftop setback.

While we’re happy to see growth on such a prominent East Village corner, the densities allowed here pale in comparison to demand, and in fact what was allowed during the postwar years. Then, the entire corridor stretching from the Village to the Upper East Side was buzzing with construction, in the form of tall red and white brick apartment buildings, especially in areas that had previously been kept low by the rumblings of elevated railways.

The western edge of the East Village has seen a number of new buildings in recent years, including Thom Mayne’s budget-busting Cooper Union Academic Building at 41 Cooper Square, and the more financially successful 51 Astor Place, designed by Fumihiko Maki. But the 1961 zoning code ensures that the new construction, like the new St. Mark’s Hotel, will never be as prominent as the older white brick towers.