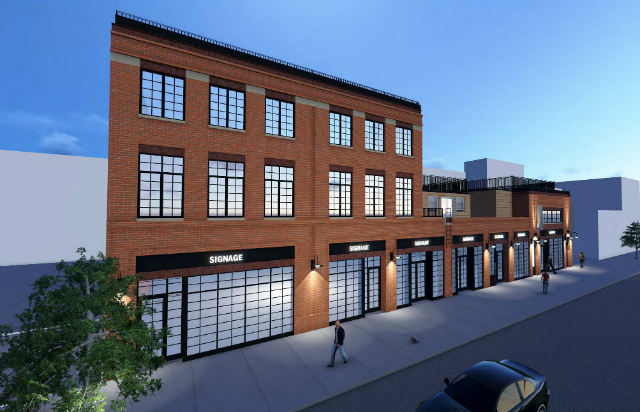 247 Bedford Avenue from the east, image by Marin Architects

In December, the New York Post’s Steve Cuozzo revealed the location of Apple’s first store in Williamsburg: 247 Bedford Avenue, on the corner of North 3rd Street, just a few blocks from the L stop.

And now, YIMBY’s come across a rendering of the renovation now underway, though it appears to have been done before Apple was chosen as a tenant, so some design changes are likely. 247 Bedford Avenue from the west, image by Marin Architects

The existing structure at 247 Bedford has a bit of character but is woefully inadequate for a tenant like Apple – the ceiling heights don’t match up, some of the brick has been covered with a green material, and the building lacks central air, with window units and through-wall units puncturing the façade.

The renovation as rendered would maintain and expand the brick, and install handsome new casement windows. We do, however, believe that the design as depicted is not the final one, since Cuozzo’s column mentions “dramatic, arched windows,” reminiscent of the ones currently in place on the Bedford Avenue frontage, but which do not appear in the rendering.

247 Bedford is notable in that it breaks a cardinal rule of New York City zoning and real estate: nearly everything that’s allowed to be residential will be, at least above the first floor. The popularity of Bedford Avenue as a retail corridor was apparently enough to induce the property owners – Red Sky Capital and Waterbridge – to remove the apartments on the second and third stories, and replace them with retail space.

The renovation is set to wrap up in April of this year.