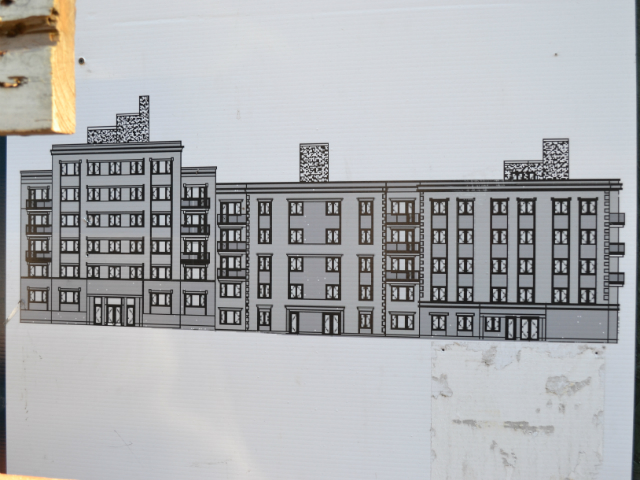 In 2009, the Broadway Triangle – formerly industrial land bounded by Flushing, Union, and Broadway, – was rezoned, somewhat controversially, for residential development catering to ultra-Orthodox Jewish condo buyers from nearby South Williamsburg.

A few years later, a smaller swath of land to the west was also designated for housing. The rezoning was designed for a project at 59 Walton Street, but as with other private rezoning applications, the rule change extended to lots nearby, making the rezoning part of a more comprehensive plan and avoiding charges of illegal spot zoning.

Prolific South Williamsburg-based developer Simon Dushinsky, of the Rabsky Group, is now taking advantage of that zoning change, with two adjacent structures under construction at 70 Lorimer Street and 80 Lorimer Street, on the corner of Marcy Avenue.

Each project – revealed on a construction fencing elevation drawing spotted by YIMBY – will rise seven stories and 75 feet into the air. No. 70 will be the larger project, with 13 apartments spread over 26,000 square feet of space (for a very spacious 2,000-square foot average apartment size), while No. 80 will have more modestly sized units, with 14 spread over 19,000 square feet of space. Neither project has enough apartments on its own to trigger the city’s minimum parking requirements, and none will be included.

Karl Fischer is the architect, and the design appears to be historicist, as is generally favored by Hasidic developers building within the community.