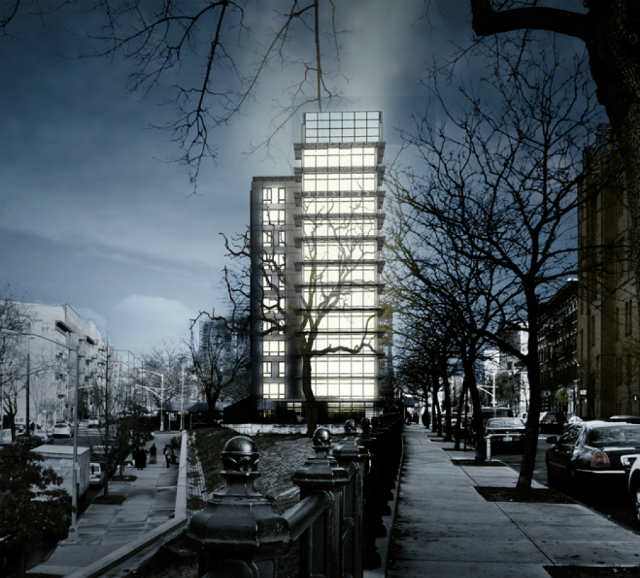 The Roman Catholic Church has been in retrenchment throughout New York City, with the latest batch of parish closures announced in November. St. Augustine’s, in the Morrisania section of the South Bronx, might show the way forward for the church’s real estate holdings. The parochial school building became home to the Harriet Tubman Charter School’s junior high, and the church building was torn down in 2013, to make way for an affordable housing development.

YIMBY can now reveal the first renderings of that project, located at 1183 Franklin Avenue (also known as 1180 Fulton Avenue). It is being designed by Magnusson Architecture and Planning and directed by New York Catholic Homes. Like all of MAP’s projects, it’s on the nicer side for an affordable housing project. While it has a bit of the standard dark brick-and-PTAC façade, it has a more interesting stepped-down massing and also features a glassy narrow side with window shading and a cleaner look, housing the elevator lobbies.

The building will vary in height from six stories to 12, with 112 apartments, ranging from supporting housing units (there will be 35) to large, family-sized apartments (21 three-bedrooms, 37 two-bedrooms, 19 one-bedrooms).

The project is 117,000 square feet in total size, and could contain a photovoltaic solar array on the top of the building and green roofs on the setbacks.

There should be a lot more affordable housing coming to the neighborhood, since the formerly industrial area around Third Avenue, just a block to the west, was rezoned in 2003. While we’ve seen an increasing number of filings for market-rate projects in the South Bronx, affordable housing developers consistently outbid smaller market-rate builders for larger sites like the former industrial parcels that dominate the rezoned area.