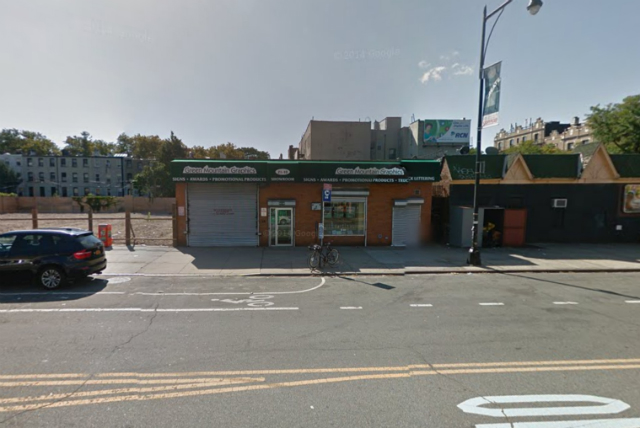 Over the weekend, an application was submitted to the Department of Buildings to construct a small seven-story apartment building in Long Island City, at 21-10 44th Drive.

The 16 units will be spread across a bit more than 16,000 square feet of space – condo-sized apartments, three per level above the ground floor, except for the top floor which will have a floor-through penthouse. The residential units will sit atop a 2,700-square foot commercial space on the ground floor, replacing the current one-story building housing a sign and graphics firm, for which a demolition permit has yet to be filed.

No parking will be included in the project, which sits on top of the E/M platforms, part of the larger Queens Court subway complex.

Igor Zaslavskiy’s Zproekt is listed as the designer, and Leon Rakhlis’s Impex Builders as the developer (though the land sale has not closed, and the site is still owned by the Rockland County-based firm that bought it in 1981). Both the developer and architect are based in Sheepshead Bay, and appear to have worked mostly there and in nearby Brighton Beach (we’ve got a rendering today of Zproekt’s 104 West End Avenue), so this project would be a step up for them in terms of price points.

The land was rezoned in 2004 from a low-density industrial designation to allow mixed-use, mid-rise buildings, though none so far have risen on this block. This project may, however, not be the first to rise – next door, a pair of one-story brick buildings were demolished about a year ago on a site with 40,000 square feet of development rights, although no new building permit has been filed.