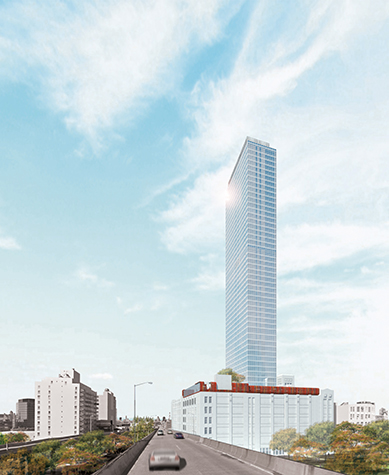 Last July, YIMBY posted about the first permits for a major new tower coming to 43-22 Queens Street, in Long Island City. Now, we have the reveal for the 54-story project, designed by SLCE.

Rockrose is developing the site, and DOB filings indicate the total scope will measure 623,337 square feet, the vast bulk of which will be dedicated to 783 apartments. The 34,477 square-foot remainder will be allocated to ground-floor retail space. Given the average unit size of approximately 750 square feet, and PTACs present in the renderings, rentals seem very likely.

The rendering depicts the first phase of a much larger 2,500-unit development that will result in several additional towers, though 80% of the existing warehouse will be preserved. The old structure remains in renderings, and appears nearly intact; the only changes greatly improve its function, as it appears to be topped by a rooftop addition as well as a significant amount of green space. As for the actual tower, it will be glassy and enormous, sharing the aesthetic of Rockrose’s other major project currently in the works, at 43-25 Hunter Street. The facade also looks to feature raw concrete, though the lot-line wall absent of windows signals an adjacent building is also in the pipeline.

Long Island City’s forest of skyscrapers is just beginning to sprout, and 43-22 Queens Street’s appearance in the renderings will be dated well before it is finished, given all the new towers in the pipeline. The site is located at the heart of Court Square, and it will soon be surrounded by neighboring buildings in the 50-story range.

With a roof height of 580 feet, 43-22 Queens Street will rank as the third-tallest residential building in Long Island City, after news broke earlier that 29-37 41st Avenue would stand 70 stories and 772 feet tall. That tower will overtake Heatherwood’s 646-foot tall 42-12 28th Street, which is already under construction.

No formal completion date has been announced.