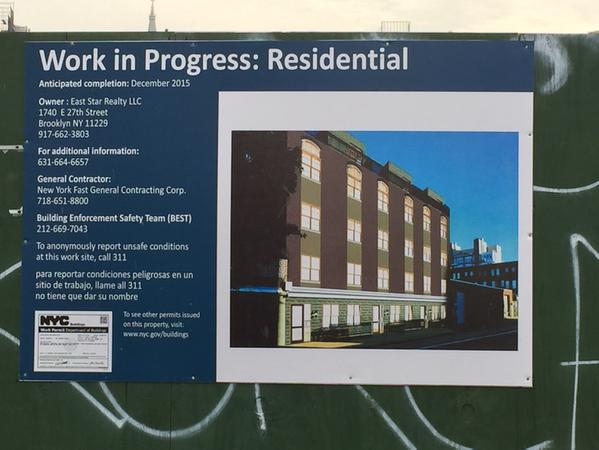 Earlier today, we posted a photo of the rendering on the construction fence at 499 Leonard Street, an 18-unit apartment building under construction in Greenpoint.

Now, we’ve got a picture of another construction fence rendering right across the street, mid-block between Driggs and Engert avenues, at 498 Leonard Street.

The design, by Tribeca-based Chi F. Lau Architect, features simple brick, with a base differentiated from the floors on top, and arched windows on the fourth floor, with what appears to be a terrace formed from the set-back penthouse level on top.

The project actually consists of three separate structures, broken apart – we assume – to duck under the zoning code’s onerous parking requirements, which don’t kick in within R6 zones until buildings have more than 10 units.

These buildings will each be four stories tall, with eight units apiece, for a total of 24 apartments. They’ll each have around 6,600 square feet of net residential space, for an average apartment size of around 825 square feet, with two apartments per floor, and the fourth-floor apartments having access to an extra penthouse level.

Tin See Fung’s East Star Realty, based in the Madison subsection of Sheepshead Bay, is the developer. The firm bought the land in July 2013 for $1.8 million, from an owner who acquired the property in 1978.