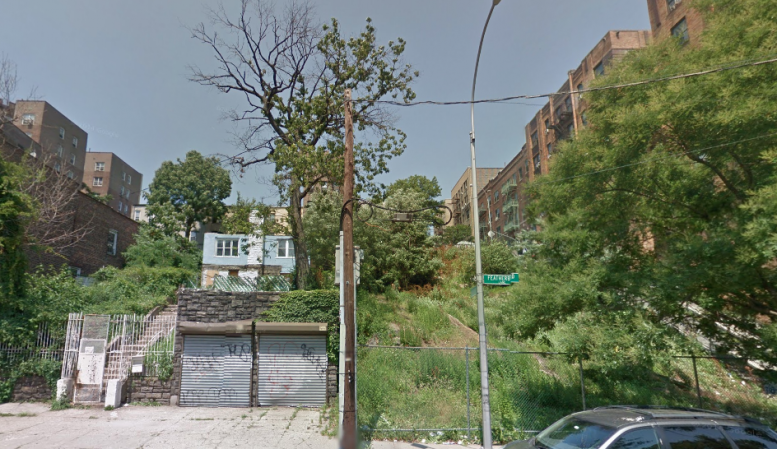 Developer Stagg Group is taking the northern Bronx by storm, and their latest project is an apartment building planned for 29 Featherbed Lane in Morris Heights, just across the Harlem River from Washington Heights.

The eight-story development will hold 59 apartments spread across 35,949 square feet of residential space, for an average apartment size of just 609 square feet—meaning that studios and one-bedrooms are likely. There will be 16 open parking spots and 14 enclosed ones on the first floor, which is exactly what zoning requires. The building will also include 30 bike storage spaces and a 1,000-square-foot roof deck.

It will fill a lot partially occupied by an odd little two-story house with a garage, which has been slated for demolition since last August. The property is a 10,000-square-foot lot between Jerome and Inwood Avenues, situated only a block from the Cross-Bronx Expressway, two blocks from the 4 train at Mt Eden Avenue, and four blocks from the B/D stop at 174th and Grand Concourse. Stagg picked it up for $559,000 last December, paying only $16 per buildable square foot.

The neighborhood, which was hit hard by arson and neglect in the ’60s and ’70s, has a burgeoning population and increasing numbers of new residential buildings filling its once-empty lots. Over the last decade, Mexicans, Dominicans and Central Americans have added to the area’s longtime black and Puerto Rican community, boosting the overall population by about 11%.

Just like Stagg’s other buildings, Mount Vernon-based Badaly Architects will handle the design.

Stagg is developing several other projects nearby, including a 94-unit market-rate building in Kingsbridge, a seven-story one near the Bronx Zoo in Belmont and an eight-story, 27-unit building in Tremont.