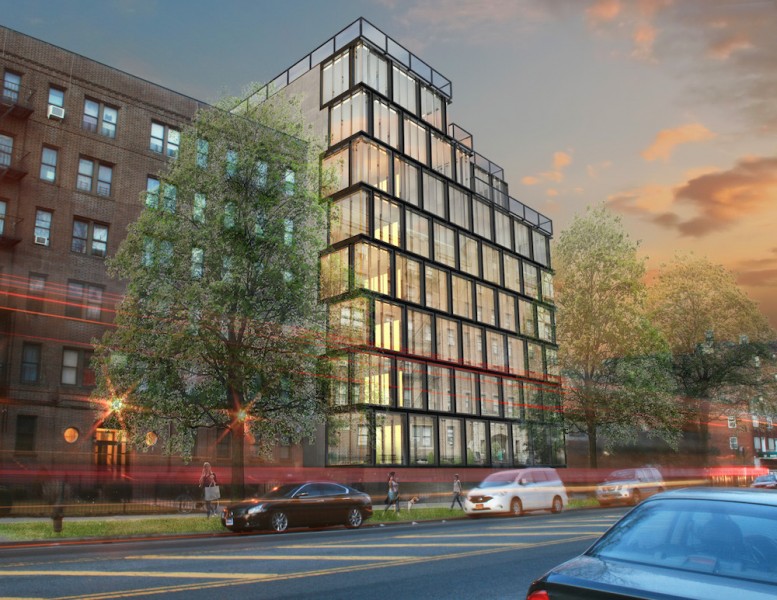 As the clock ticks down to the state’s 421-a renewal deadline on June 15, developers are wondering how they’ll fare if condos no longer qualify for the tax abatement. Companies building lower cost apartments on the fringes of the city will likely be the hardest hit, since the tax break helps attract buyers to less desirable neighborhoods.

“I think it’s going to impact people who want to buy an apartment, end users, not developers,” explained Boaz Gilad, the president of Bed-Stuy-based developer Brookland Capital, which builds condos and rentals all over Brooklyn. “My concern is what’s going to happen when interest is going to go up in five years. The moment interest rates climb up, they’re not going to be able to afford those apartments, so either you’ll have a high level of defaults or people simply won’t buy those apartments.”

Last month, Mayor de Blasio struck a deal with the Real Estate Board of New York that looks pretty similar to Bloomberg’s developer-friendly 421-a program—at least when it comes to rentals. His proposal calls for any new rental building to set aside 25% to 30% of its units as affordable housing, in exchange for tax breaks that last 25 to 35 years.

He also wants to eliminate 421-a abatements for condo projects, arguing the tax break should only help generate below-market rentals.

“This is one of the most wasteful aspects of the current 421a program, costing the taxpayer $1.6 million in foregone taxes to produce each affordable apartment,” de Blasio spokesman Wiley Norvell wrote in an e-mail to YIMBY. “Our housing crisis is, first and foremost, a rental crisis. When it comes to focusing our limited resources, we have to put our energy and our tax dollars there.”

.@billdeblasio 421a reform vs. straight extender, in one chart pic.twitter.com/E5BzAvxSx9

The Independent Budget Office estimates that the mayor’s plan would cost taxpayers $2.7 billion more than the current 421-a program, but the cost of creating or preserving an affordable unit for one year would decrease by $20,900. 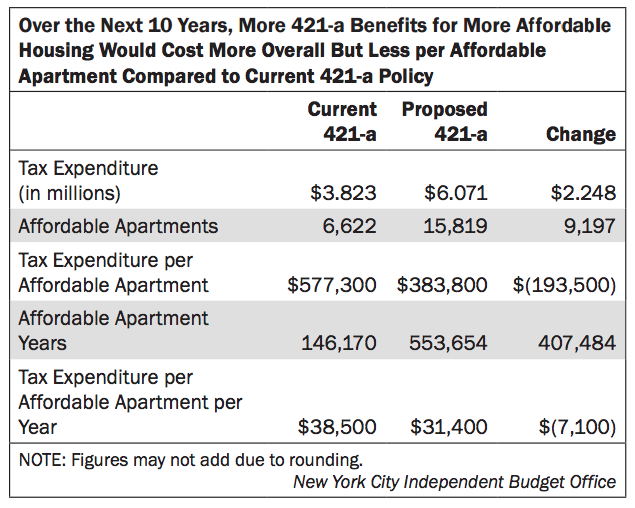 Chart via the Independent Budget Office

However, since 2008, a quarter of onsite affordable housing was built in condo and co-op developments, according to the IBO. That loss may be offset by more affordable units in new rental projects. If not, de Blasio’s gamble could hurt the production of subsidized affordable housing.

And here’s the kicker for small developers: the IBO predicts 10% of all planned condos priced under $500,000 won’t be built without the abatement.

Since the plan offers a “menu of options” with varying income ranges and rents for affordable units, rental developers think de Blasio’s plan will probably work for them.

Joshua Weissman of JCAL Development is developing two market-rate rental buildings on Alexander Avenue in the South Bronx neighborhood of Mott Haven. The area has few unsubsidized new construction projects, and 421-a helped get his off the ground. “I think adding some affordability to the project is a good idea, but the level of affordability really needs to be determined,” he said. “I hope that there’s some kind of abatement for us, but we’ll still do market-rate in the South Bronx, because we believe in the area.”

Meanwhile, condo builders believe that scrapping the abatement may hurt their bottom lines, but it will affect their buyers more.

“What’s gonna happen is exactly what happened in 2008,” said Eli Karp, who develops condos in Prospect Heights, Crown Heights and Flatbush through his firm Hello Living. “No one is going to build condos. And for rentals, they’re going to build the cheapest possible construction. In my opinion, it’s going to be a catastrophe.”

Much like Gilad, Karp builds for younger buyers, who will struggle to pay $1000 a month in property taxes instead of $200 a month (or less) with the abatement. “By punishing the people who are willing to be first-time homebuyers, you’re taxing them and not allowing them to get in,” he added. “I think it’s unfair.”

And then there’s the possibility that all 421-a projects will have to pay their construction workers prevailing wages, which can add up to more than $100 an hour for some trades, even before overtime and supplemental benefits.

Several state legislators and Governor Cuomo back this plan, despite the fact union wages would cost the city roughly 17,000 affordable apartments. However, the mayor doesn’t support Cuomo’s pricey proposal, and REBNY president Steve Spinola declared it “a non-starter.”

Small and midsize developers throughout Brooklyn, Queens and the Bronx agree that being forced to pay their pipefitters, electricians and carpenters union wages would be disastrous.

“If we have to pay prevailing wages, we won’t be able to build,” said Gilad. “No one is going to buy an apartment in Crown Heights for $1,400 per square foot. We have to build non-union.”

But earlier today, there were rumors the mayor was trying to forge a compromise on the issue. If prevailing wages make it into the revamped 421-a, they might only be required for new developments constructed south of 110th Street, Capital reported.

1 Comment on "Developers Worry About Building Condos Without 421-a"