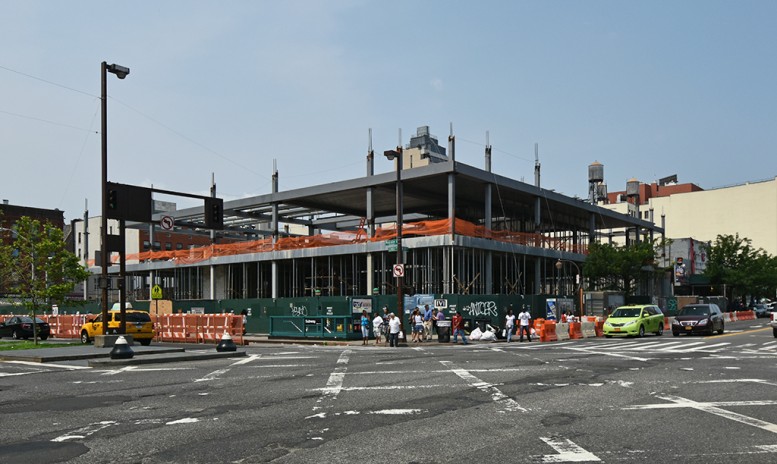 Nothing symbolizes Harlem’s transformation better than the start of construction on the Whole Foods at 100 West 125th Street, which has been in the works since 2012. Harlem+Bespoke spotted foundation work in April, and now Tectonic has sent along some shots of the latest progress.

So far, steel framing has reached the second floor. Developer Jeff Sutton first broke ground on the six-story commercial project early last year, but it’s taken a while for work to get going.

Plans filed in early 2013 call for 161,285 square feet of commercial space in a 103-foot-tall building. In the intervening years, several major chains have signed on as tenants, including American Eagle, Burlington Coat Factory, Olive Garden and TD Bank. Furniture retailer Raymour and Flanigan filled the last retail space in May, according to the Post.

The retail complex will fill a major need on 125th Street, a bustling thoroughfare served by seven subway lines, and the center of one of Manhattan’s fastest growing neighborhoods. It will rise across the street from another big commercial building that houses a CVS, Dunkin Donuts, Marshall’s and Staples.

Staten Island-based Gambino and Laporta Architecture will be handle the design, and construction is expected to wrap next year.

On the same block between Lenox and Adam Clayton Powell Boulevard, the Studio Museum of Harlem has just announced a $122 million expansion. It will grow from 60,000 to 70,000 square feet and gain a new, boxy facade designed by architect David Adjaye.

Moving east, two major commercial tenants will occupy a six-story mixed-use building under construction at 5 West 125th Street. Bed, Bath and Beyond and WeWork will take up the second and third floors, and 30 apartments will be stacked on top.