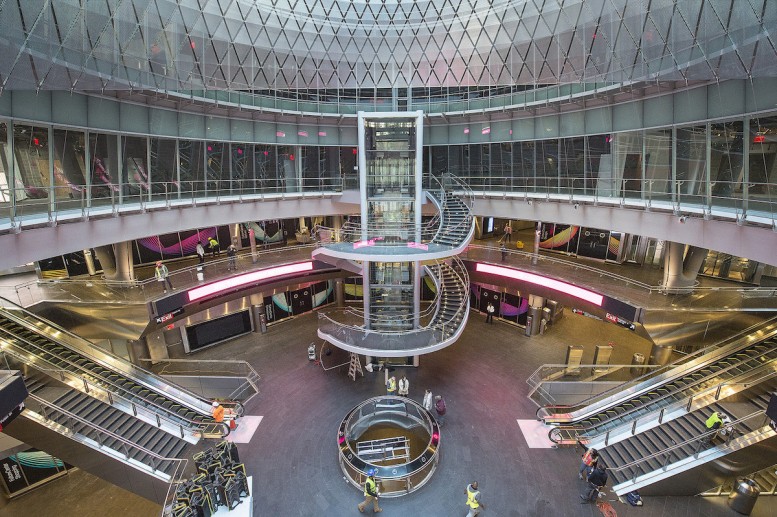 When the Fulton Transit Center opened last November, glowing reviews celebrated its 53-foot-wide oculus while lamenting its $1.4 billion price tag, which had doubled since the project’s inception several years before. Some fears about the cost were assuaged by the fact that the MTA had turned the central hub at Fulton into a 180,000-square-foot mall, with retail encircling a four-story atrium.

Nine months have passed, and the Fulton Center’s glassy storefronts remain empty. Retail giant Westfield manages the leasing for 3 World Center, 4 World Trade Center and the Fulton Transit hub. There will be 350,000 square feet of retail across 3 and 4 WTC, as well as the Calatrava-designed Oculus, and the Bjarke Ingels-designed 2 World Trade Center will add 90,000 square feet to the mix when it’s complete.

An additional 65,000 square feet of retail occupies the upper floors of the Fulton Center and office space in the 19th century Corbin Building next door at 13 John Street. (Of those 65,000 square feet, two-thirds will be retail, and one third office space.) Although Westfield is handling leasing for both projects, the contracts are separate. The Fulton Center lease is with the MTA, and the WTC lease is with the Port Authority.

Now, spokespeople from Westfield and the MTA tell YIMBY that the Fulton Center retail will begin opening in the fall and continue through 2016. There will be about 20 stores ranging from retail and service providers to eateries and full service restaurants.

While they couldn’t offer any details, we hope that the retailers “benefit the neighborhood,” as a Westfield VP promised the local community board last year. About 150 businesses were evicted before the MTA began construction on the Fulton Center in 2005, according to Community Board 1 chairperson Catherine McVay Hughes and the Downtown Express.

Westfield has been claiming for months that 90% of its WTC retail is leased, but they’ve refused to release a full list of tenants. However, they announced several upscale retailers for 3 and 4 WTC last year, including Eataly, Michael Kors, L’Occitane, La Colombe coffee, Breitling, Kiehl’s, and a gourmet grocery store.

Westfield signed their lease with the MTA at the end of 2013, and at the same time, they paid the Port Authority $800 million for full control of the WTC retail. The lease with the MTA lasts 20 years after the second anniversary of Fulton Center’s opening or 20 years after the date when 80% of the commercial space is occupied—whichever is sooner, according to MTA financial documents. After that, Westfield will be able to extend the lease for two successive 10 year periods.

“Westfield is not yet paying rent to the MTA, but is covering the substantial operating expenses that would otherwise fall to us,” MTA spokesman Adam Lisberg wrote in an email to YIMBY. “Thus, Westfield has quite a motivation to start generating positive cash flow as soon as possible for our mutual benefit.”

And Lisberg assured us that “Westfield is in advanced stages of leasing activity, subtenant design and fitout work.”

In the meantime, commercial real estate around the Fulton Center is booming. Last week, Crown Acquisitions shelled out more than $25 million for a little souvenir shop next door at 144 Fulton Street. And across the street at 143 Fulton, Tribeca Associates is planning a 26-story, 228-key hotel.

Update: This story has been changed to reflect the fact that the WTC and Fulton Transit Center are separate projects, although Westfield is handling the retail for both.