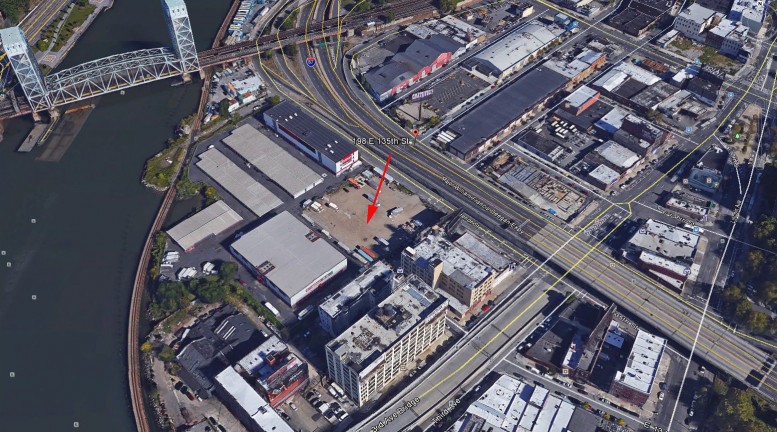 Development is on fire in the Mott Haven section of the South Bronx, but yesterday’s filings brought the largest ground-up project the neighborhood has seen in decades. Williamsburg-based builder Cheskel Schwimmer filed new building applications for a 25-story residential development at 198 East 135th Street, next the Major Deegan Expressway, the Park Avenue Bridge, and the Third Avenue Bridge.

The building will reach 250 feet into the air and hold 465 apartments. They’ll split across 346,632 square feet of residential space, and the average unit will measure 745 square feet. Apartments will begin on the third floor, with 19 units, followed by 24 units per floor on the fourth through 11th stories, 21 units each on the 12th through 21st floors, 17 units on the 22nd, 13 on the 23rd, and then nine and five units respectively on the top two floors.

The ground floor will house two commercial spaces spanning 5,900 square feet, in addition to a rec room and 128-car garage. Amenity spaces, laundry, and storage for residents will occupy the cellar. And another 78 parking spots will fill the second floor.

Overall, the project will have 206 parking spots, which is about 20 more spaces than required by the zoning code. We don’t know if this building will be partially or fully subsidized, but the city might cut the parking requirements if it includes below-market units. City Planning’s proposed zoning tweaks—which will enter the public review process this fall—will waive parking for 100% affordable developments and reduce it for mixed-income buildings.

Karl Fischer will be responsible for the design.

Schwimmer paid a whopping $15,470,000 for the large vacant property in May, as Welcome2theBronx noted earlier this summer. Storage company Cube Smart owned the lot previously, and they have a self-storage facility next door at 200 East 135th Street.

198 East 135th sits a few hundred feet from the Harlem River in Flood Zone A, but the permits don’t list any flood protection measures. But the property still benefits from some very favorable R8 zoning, which encourages large towers. The city rezoned several desolate industrial blocks along the waterfront from manufacturing to mixed-use back in 2005, but developers paid little attention to the area until last year.