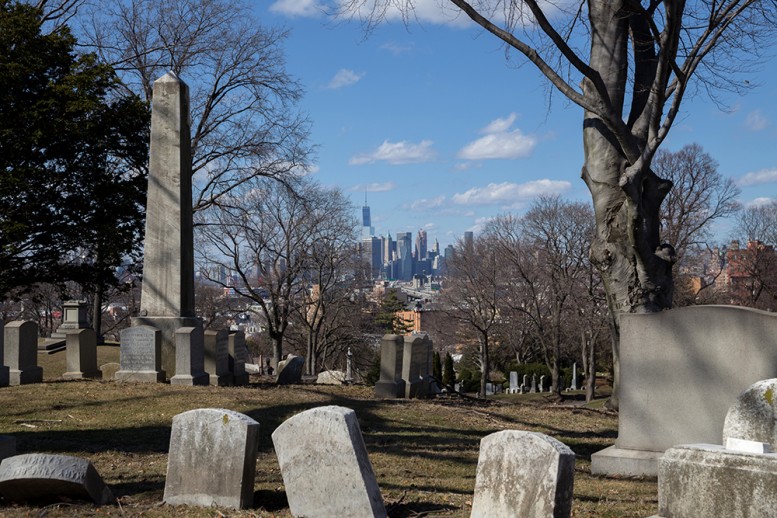 The Landmarks Preservation Commission is trying to clear its backlog of 95 properties that have been sitting on its calendar since before 2010. On Tuesday, it held a public hearing for those items that are in the borough of Brooklyn, that land of Kings. Among them was the 478-acre Green-Wood Cemetery. It has been on the calendar for over a decade and support for designating the entire site as a landmark was limited, though support for designating specific parts of it was greater. Green-Wood Cemetery was founded in 1838 and its original 178 acres were laid out by landscape architect David Bates Douglass. It includes forests, open lawns, lakes, hills, valleys, and dells with names like Vista Hill, Halcyon Lake, Camellia Path, Sylvan Cliff, and Oaken Bluff. Its 560,000 permanent residents include Leonard Bernstein, “Boss” Tweed, Charles Ebbets, Jean-Michel Basquiat, Louis Comfort Tiffany, Horace Greeley, and other celebrities. Its Gothic Revival gates were landmarked in 1966. The proposal to landmark the cemetery as a whole was on three dates in 1981 – February 10, May 19, and August 11. Now it’s back on the front burner and even preservation groups aren’t supporting designation of the full cemetery. Richard Moylan, president of the cemetery, noted several ways designation would be counterproductive and unfeasible. A cemetery isn’t just land. It is literally thousands of structures and monuments, many of them owned by individuals (next of kin usually) and not by the cemetery. It would mean any change to those monuments and structures would require the approval of the LPC. The cemetery performs 1,200 burials a year, installs approximately 250 new monuments and memorials a year, and plants over 350 trees and shrubs a year while removing over 100. “Will each plot holder not only need Green-Wood’s permission to install a family monument or shrub, but permission from the Landmarks Preservation Commission as well?” Moylan said. Nobody implied that the cemetery has any intention of being anything but a cemetery. “If it ain’t broke, why fix it?” said Green-Wood trustee Otis Pearsall. Attorney Ken Fischer opposed designation, citing possible conflicts with the First Amendment right to self expression as well as state laws governing cemeteries.

The Historic Districts Council’s Cinnia Finfer suggested that designating some structures at the cemetery, such as the chapel, would be a better plan. Her testimony is below.

Green-Wood Cemetery is a National Historic Landmark encompassing 478 acres, with over 500,000 graves, including those of many notable historic figures. It was the third – and remains the largest – rural cemetery established in the United States, and the first rural cemetery in New York City.

Founded in 1838, Green-Wood was designed by David Bates Douglass and described as a tour de force of the picturesque landscape. Carefully sited with dramatic views of the city and harbor, a viewshed it retains today, Green-Wood is also one of the most extensive, and among the most intact, landscapes created on the principles of Andrew Jackson Downing in New York City. The cemetery is a veritable architectural encyclopedia for its amalgam of mortuary architecture, buildings and statuary. Among the styles represented are Classical, Gothic and Romanesque. The distinctive, brownstone Gothic Revival entrance, designed by Richard Upjohn, was designated an Individual Landmark in 1966.

While no one would dispute the worthiness of this magnificent landscape, HDC feels that the designation of the entire cemetery would be burdensome to both the cemetery’s management and the Landmarks Preservation Commission. The cemetery’s plots, including headstones and mausoleums, are owned by individual property owners, which would make for onerous outreach and regulatory processes. However, the properties within the cemetery that are owned by Green-Wood, including the Chapel, designed by noted architects Warren and Wetmore as a scaled-down version of Christopher Wren’s Tom Tower at Christ Church, Oxford, as well as the gatehouses and other ancillary structures, would be welcome additions to New York City’s roster of protected landmarks. Ensuring the sensitive maintenance of the structures that set a standard for architecture in urban parks would be an important and worthwhile endeavor.

The New York Landmarks Conservancy’s Andrea Goldman agreed that the chapel, built in 1911, and the Hamilton Parkway gatehouse, dating back to about 1876, should be landmarked. This sentiment was echoed by tour guide Henry Matthews and Mark Hendricks of the Municipal Art Society.