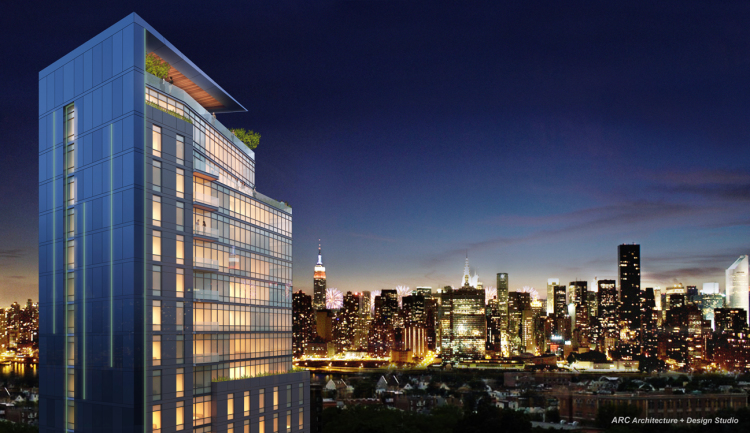 Mayor Bill de Blasio has decided to tamp down on hotel development in industrial zones, but dozens of hotels are already on the rise in Long Island City’s manufacturing areas. YIMBY has a rendering of a 20-story hotel in the works there at 52-09 31st Place, in a particularly forlorn and polluted micro-hood known as Blissville.

The neighborhood is bounded by Hunters Point Avenue, Calvary Cemetery, and Newtown Creek, and further hemmed in by the elevated Long Island Expressway. Back in the 19th century, Blissville was known for being home to some of the city’s most polluting and malodorous industries, like chemical factories, soap makers, petroleum processors, and fertilizer factories. Now, auto repair shops, warehouses, and building supply companies populate most of its low-slung commercial buildings.

The hotel will reach 210 feet into the air on a parcel just south of the LIE, between Bradley and Starr Avenues and just around the corner from Silvercup Studios. It’ll hold 200 rooms and 101,410 square feet of commercial space.

The first two floors will have a lobby, retail, conference rooms, and a dining hall. Floors three through 19 will host seven to 14 hotel rooms per story. Amenity spaces, like a gym and conference area, will fill the top floor, and there will be a roof deck. 51 parking spots will be divided between the cellar and first floor.

Forest Hills-based ARC Architecture and Design are the architects, and the developer is Delwar Hussain, who heads an LLC headquartered in Syosset, N.Y.

Plans were first filed in April of last year, and the DOB approved the plan exam application in January. The project still doesn’t have work permits, but the developers managed to secure permits to knock down a single-story garage on the property last month.

The site runs through the block to 34th Street and spans 20,300 square feet. The zoning is generous for manufacturing, allowing a floor area ratio of five, which makes it ideal for hotel development.