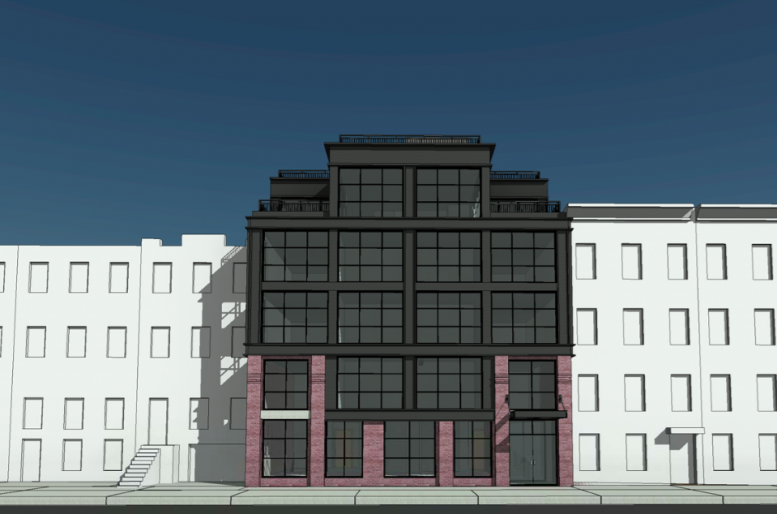 An aging brick church building at 120 Java Street in Greenpoint is about to become apartments and gain a few extra stories. Alteration applications were filed Friday to convert the structure to residential and add two floors to the three-story building. 120 Java Street in December 2014, photo by Christopher Bride for PropertyShark

The work will triple the size of the building and raise its roofline from 30 to 50 feet. When construction finishes, there will be 18 apartments divided across 23,145 square feet of residential space. The developers aren’t sure whether it’ll be rentals or condos, but the average unit will be fairly large – nearly 1,300 square feet. Each floor will have four apartments, except for the fifth, which will have two large units. The Church of the Ascension, which sits next door on Kent Street, used the building as their parish hall.

Chris Horrigan of Midtown-based Horrigan Companies is the developer, and Christa Horrigan’s Horrigan O’Malley Architects – headquartered in Gowanus – are responsible for the design.

The Horrigans purchased the 4,750-square-foot property for $4,050,000 in July. They bought the Java Street lot and transferred several thousand square feet of air rights from the Episcopal church’s headquarters at 127 Kent Street. The church likely used the Java Street building for community meetings, and it must have offered valuable extra space while they were running Hurricane Sandy relief efforts. The landmarked, stone worship hall on Kent Street sits inside the Greenpoint Historic District, and it was built back in 1866. The unusual Java Street building dates back to at least the 1930s, according to DOB records, but we suspect it’s much older. The facade appears to have been poorly altered and maintained over the years, and the odd windows simply wouldn’t work with the new floors. While it’s sad to lose an architecturally unique building like this one, this part of Greenpoint could certainly use more density. The Greenpoint Avenue G stop is only a few minutes away, and much of the area is still populated by brick row houses and small apartment buildings. And several of the most picturesque blocks are landmarked, which means that little new construction happens. The Astral, which sits at the eastern end of this block, is a notable exception, because it’s larger than anything that could be built under modern zoning. Oil tycoon Charles Pratt—of Pratt Institute fame—constructed the six-story, Queen Anne-style apartment building in 1885.