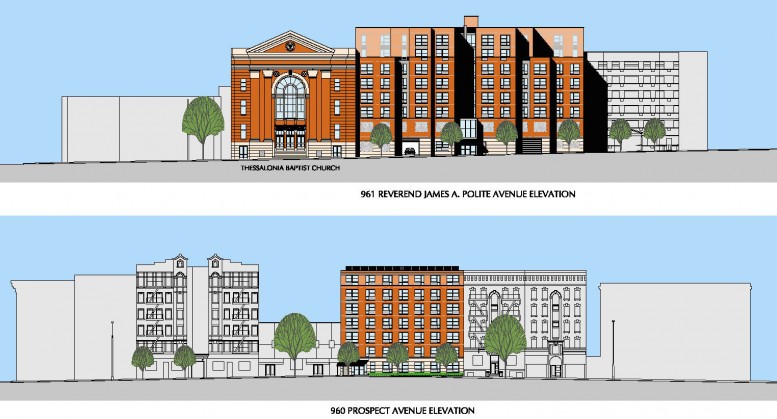 It’s been a year since YIMBY revealed plans to develop two affordable rental buildings next to Thessalonia Baptist Church in Morrisania, in the South Bronx. Now, new building applications have been filed for the first piece of the project at 960 Prospect Avenue.

The seven-story building will rise on an empty lot between East 164th and East 165th streets, only a few short blocks from the Intervale stop on the 2 and 5 trains. It’ll have 54 apartments divided across 49,836 square feet of residential space, for units averaging 922 square feet.

The second building, at 961 Reverend James A. Polite Avenue, will rise eight stories and hold 66 apartments. The pair will bring 120 apartments to the neighborhood – 38 one-bedrooms, 76 two-bedrooms, and six three-bedrooms – affordable to families making less than 60 percent of the Area Median Income. That amounts to $46,620 for a family of three.

Together, the buildings will be known as Thessalonia Manor, after the church that leased their land for the development.

Each building will have bike storage in the cellar, laundry on the first floor, and a common room on the third floor.

The plans also include parking for 68 cars, spread between the first two floors in the eastern building on Rev. James A. Polite Avenue. We hope the developers decide to scrap the parking, because it’s no longer required for affordable projects. The City Council passed the mayor’s big package of zoning changes for affordable housing last month, and now affordable and senior developments within half a mile of the subway are (usually) exempt from building parking.

Urban Builders Collaborative and CMC Development are co-developing the complex, and James McCullar Architecture is responsible for the design.

Housing Lottery Launches for 2321 Belmont Avenue in Belmont, The Bronx

Permits Filed for 2150 Clinton Avenue in Belmont, The Bronx