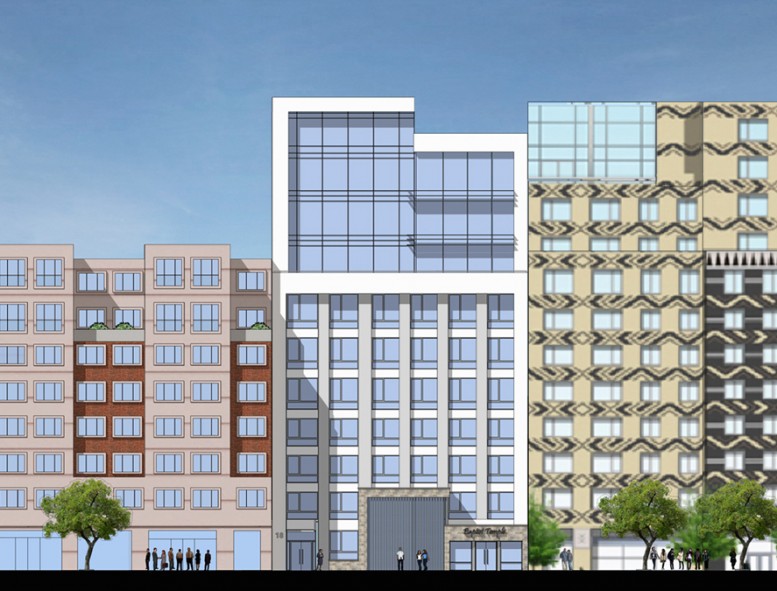 Earlier this week, we told you about plans to demolish a Baptist church in Harlem and develop apartments in its place. Now, we have renderings for the 11-story project 20 West 116th Street, between Malcolm X Boulevard and Fifth Avenue.

Carthage Real Estate Advisors, based nearby on Park Avenue between 120th and 121st streets, entered into contract to buy the property from the Harlem Baptist Temple. Since the sale hasn’t closed or hit public records yet, they couldn’t discuss the sale price. But they do plan to give the church 5,800 square feet in the cellar and ground floor of the new building.

Twenty-eight apartments will be stacked on top, spread across 29,540 square feet of residential space. While the 1,055-square-foot units suggest condos, Jerrod Delaine at Carthage said they hadn’t decided whether the building would be rentals or condos. He noted that debate over the future of the 421-a tax exemption – and potential union labor requirements in the new program – were creating uncertainty for them. Under the old version of 421-a, new construction in Manhattan was generally excluded from receiving the tax break, unless the developer agreed to rent 20 percent of the units at below-market rates. The design for the new building is fairly nondescript, but the ground floor was clearly designed with the church in mind. GF55 Partners is responsible for the architecture.

The old church was originally built as a synagogue in 1906. A fire destroyed the sanctuary in 1965, forcing the church to build a false ceiling and seal off the upper balcony. Age – and probably damage from that fire – eventually caught up with the old stained-glass-fronted structure, and the city declared the facade and roof unstable in 2009. HPD ripped off the church’s roof and billed the house of worship for repairs. While they did eventually pull together the funds to repair the building, the church spent two years open to the elements.