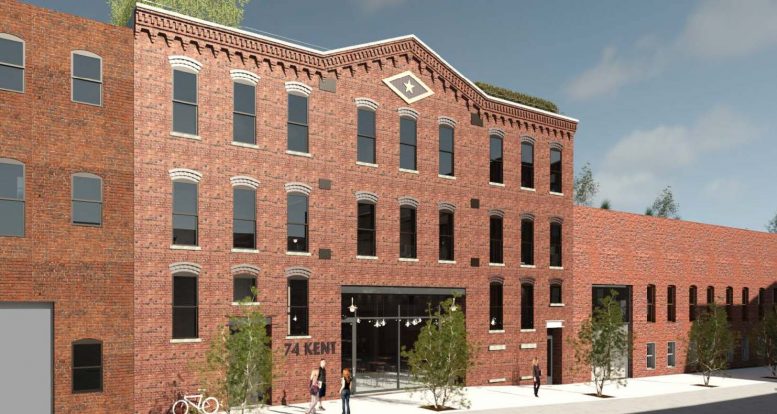 One of the landmarked Eberhard Pencil Factory buildings has sat vacant at 74 Kent Street in Greenpoint for several years, after a drug bust and a failed residential conversion. Now, renovations are nearly complete at the 108-year-old building, and the owners, Caerus Group, are on the hunt for trendy tenants to fill the space.

They’ve commissioned Chelsea-based architects SGA to create renderings of what the built-out spaces could look like. For now, the floors are renovated and empty. Caerus hopes to attract tech, media, and design tenants, and restaurants or retailers could fill the ground floor and lower level. The brokers, Alex Cohen of CORE and Stephen Ruiz of Cushman and Wakefield, expect to rent the space for roughly $50 a square foot. “Vice Media was the first to pay those kind of office rents [in North Brooklyn],” said Ruiz, referring to the company’s new headquarters in part of the former Domino Sugar Factory campus in south Williamsburg. “And there are projections that rents could get up to $60 or $70 a square foot.” He added that this was the largest office space available for rent in the area right now, rivaled only by the 40,000-square-foot community facility space in the William Vale Hotel in Williamsburg. The 33,000-square-foot building features 16-foot ceilings, and individual floors range from 8,200 to 9,200 square feet. Tenants on the second and third floors will get private terraces, and there will be a shared, landscaped roof deck on the top floor.

74 Kent first hit the market at $60 a square foot in December, but no tenants have signed leases yet, according to the brokers. A potential restaurant/bar at 74 Kent, rendering by SGA

Kickstarter moved into another one of the landmarked pencil factory buildings two years ago, becoming the first major “TAMI” tenant to arrive in Greenpoint. TAMI stands for technology, advertising, media, and information. More of the possible restaurant/bar at 74 Kent, rendering by SGA The roof deck. rendering by SGA