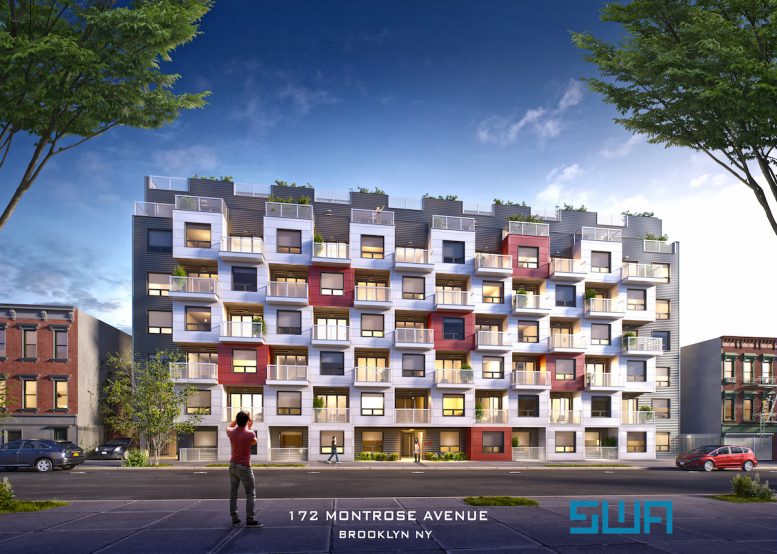 It’s been six months since builder Moses Silberstein filed plans for an apartment building near the Montrose Avenue L stop in East Williamsburg. Now, we have the first look at the project at 172 Montrose Avenue, where construction will begin in the next few months.

The design architects, Bed-Stuy-based Samuel Wieder Associates, sent along this rendering of the seven-story building. The facade will be boxy and stacked, much like ODA New York’s singular geometric style, and feature a palette of red, white, and black panels. Rego Park-based Diego Aguilera Architects are the architects of record, which means they applied for the permits.

The building will host 75 apartments across 49,664 square feet of residential space. The apartments will be rentals, and the average unit will measure about 660 square feet. The developer also hopes to build a larger project than zoning would typically allow here, which could means that some of the apartments will be affordable. And the plans call for 36 parking spots in a lot behind the building, which is less than the 53 spots the city requires for 75 apartments in this part of Williamsburg.

For this project, Silberstein is listed under an LLC based in South Williamsburg. But the owner is FGI Realty Corp., who purchased the property in 1974.

The 17,000-square-foot site is home to two warehouses, and they have not yet been demolished.