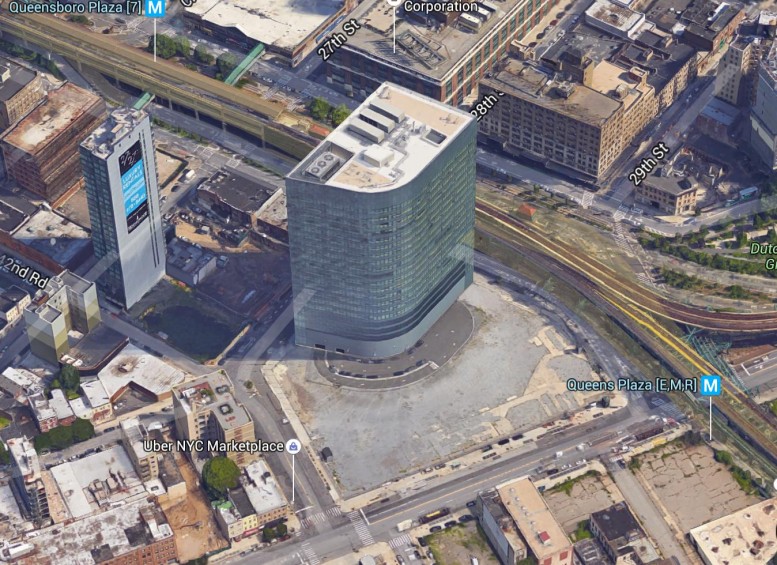 New building applications filed on Friday call for a million square feet of commercial and industrial space at 28-07 Jackson Avenue. The building will reach 27 stories and 396 feet into the air on a large parcel bounded by 28th Street, 42nd Road, Jackson Avenue, and Queens Plaza South. It will also share a block-long lot with Two Gotham Center, which Tishman developed in 2011 and sold to H&R REIT for $415.5 million later that year.

The complex will hold 900,500 square feet of commercial space and 27,569 square feet of manufacturing. It will consist of two towers, named One and Three Gotham Center.

There will also be 250 parking spots, spread between the first two floors and a mezzanine level sandwiched in between them. Parking isn’t required in Long Island City, but zoning rules for the area around Queens Plaza cap the maximum amount of non-residential parking at 250 spaces.

Tishman hopes to raise $145 million in EB-5 funding for the development, which is expected to cost $700 million, according to TRD.

Across Jackson Avenue, Tishman is developing a three-building, 1,789-unit residential project. The tallest of the towers will top out at 53 stories, and the other two will reach 44 and 33 stories respectively. The huge and long-abandoned CN West Chemical complex used to occupy the property, but it was demolished last year.