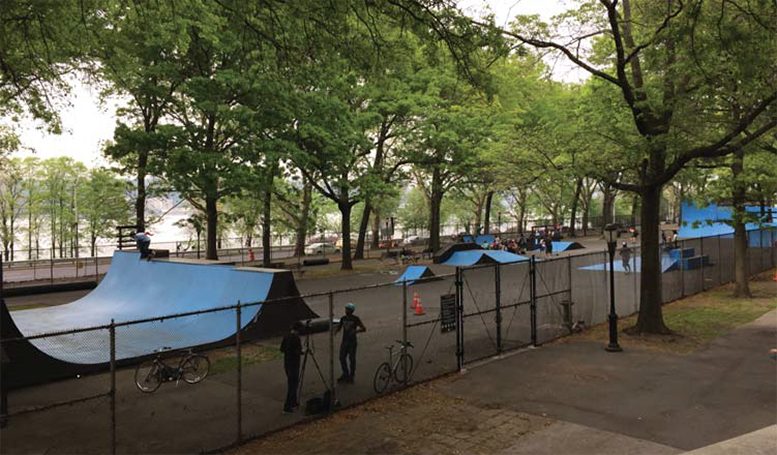 Skateboarders in Upper Manhattan are in for a new experience. On Tuesday, the Landmarks Preservation gave its blessing to a proposal to upgrade the 20-year-old skate park in Riverside Park.

Riverside Park is located on the west side of Upper Manhattan and is another creation of Central Park co-designer Frederick Law Olmsted. Originally, it stretched from West 72nd Street to West 125th Street. Many others, including Robert Moses, have had a hand in shaping it since Olmsted’s work in the 1870s. The park now stretches all the way from West 59th Street to West 155th Street.

In 1996, prominent skateboarder Andy Kessler worked with New York City Parks Commissioner Henry Stern, who matched a $50,000 grant from the National Park Service, and the Riverside Park skate park was created. It is located around West 109th Street. It’s clearly visible from the Henry Hudson Parkway.

It was constructed using wood and sheet metal. It features some of the only use of its shade of blue outside of the Parks Department’s swimming pools.

Now, two decades later, the Parks Department is looking to upgrade the facility, and they have brought in Brooklyn-based W Architecture & Landscape Architecture to design the changes. Their goal is create a more permanent facility. The new park will have less overall fencing and more seating, allowing for more passive use. Some of the approximately three dozen trees are 75- to 80-year-old, and some of them will be relocated. Three of them, however, will be removed due to poor health.

Riverside Park was designated a city scenic landmark in 1980, which is why the proposal came before the LPC. However, because the park is city property, the commission only acts in an advisory capacity. So, rather than issue a certificate of appropriateness in the matter, the commission issued an advisory report. At any rate, the commissioners had very little to say, as this isn’t particularly controversial for them. Commissioner Michael Devonshire called the plan “great.” LPC Chair Meenakshi Srinivasan repeated that remark and told the design team members they had done a “very nice job.” The commissioners voted unanimously to adopt the report, giving the project their blessing.

The next step for the project is the Public Design Commission, formerly known as the New York City Art Commission. The PDC’s vote will be binding.