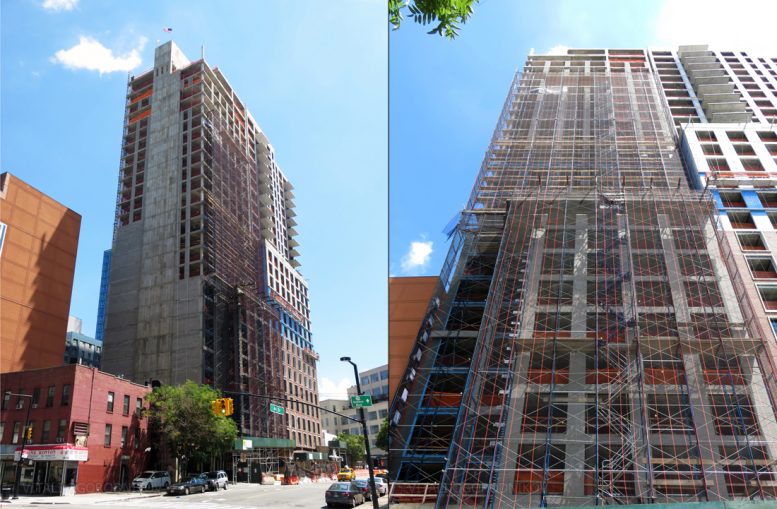 Watermark Court Square at 27-19 44th Drive. Left: looking southeast from Jackson Avenue. Right: the façade at 44th Drive, with The Edison to the right. Photos by the author.

At the start of the month YIMBY announced the topping out of Watermark Court Square, at 27-19 44th Drive. The 168-unit rental building had added around 17 floors since the end of May. Building permits place the height at 282 feet, although it is not certain whether the figure includes its mechanical bulkhead. In either case, the 27-story tower now stands among the dozen-tallest buildings in the Court Square district, eight of which topped out less than a year ago. The design by Handel Architects channels a certain synergy between tradition and modernity. While the gray brick speaks of the neighborhood’s architectural past, the facade grid expresses the structure rather than conceals it, since it mostly follows the lines of the columns and the floor plates. The only superfluous addition is the splitting of the building’s three structural bays into six rows of windows, meaning that three of the seven brick verticals at the front facade do not conceal any concrete columns behind them. The square grid would contain floor-to-ceiling windows, which would compose the majority of the street-facing surface.

A shallow, asymmetrical setback above the ninth floor adds dimension to the otherwise-flat expanse. Metal clips of a still-unknown nature protrude sideways from its northern corner. It is possible that they may anchor a yet-to-be-revealed architectural element. Front (west) elevation. The Edison is on the right. In the rear, the facade consists of cement panels rather than gray brick. Rear (east) elevation. The Edison is on the left. The Watermark is on the right.

The tower’s construction pace marches in step with the Edison, a 26-story residential building rising next door at 27-21 44th Drive. Like mountain summits conquered by intrepid mountaineers, the double pinnacles are crowned by flags that announce the arrival of the man-made peaks on the skyline. The Edison is on the left. The Watermark is on the right.

The slender pinnacle of the Edison rises about ten feet above the top of the Watermark Court Square. Otherwise, the two buildings are rather evenly matched, from the notched, street-facing setbacks at the their top floors, to their main roof surfaces and the lines of the bulkheads. The two projects also remind us not to take building heights listed within the permits at face value. While the permits for the Watermark list the structure as 282 feet high, the permits for the Edison place it at 277 feet, even though the latter is clearly taller than the former. The height hounds among us best keep in mind that different sources use different height benchmarks and standards, given their varying purposes (permits, zoning, architectural, etc).

Though the Edison’s 100-foot-wide façade at 44th Drive beats the Watermark’s width by 25 feet, the latter extends about 20 feet deeper into the block interior. There, a row of windows adorns the exposed sliver of the Watermark’s south wall at its upper half. These windows look into the narrow canyon that forms between the Edison and 44-26 Purves Street, the third tower that rises on the densely built block. The narrow panorama framed between the tower slabs looks upon the low-slung, industrial portion of Long Island City on the other side of the Sunnyside Railyards. In a lucky coincidence, the slender view corridor centers directly on the new span of the Kosciuszko Bridge, which is under construction 1.5 miles to the southeast. The project’s prime views open to the west, where the Manhattan skyline rises beyond the low- and mid-rise cityscape of southern Long Island City. To the north and east, future residents would gaze upon the rapidly-growing skyscraper forest of Court Square, which makes for an intensely urban vista unlike any other in Queens outside of this neighborhood. 27-19 44th Drive is expected to open its doors around the same time as several of its skyscraper neighbors. But even now, the former district of warehouses, auto shops, and overgrown lots is nigh-unrecognizable to anyone that was away for more than a year. In their place the returning visitor would find a dense, urban neighborhood that reinvents this centrally-located, transit-rich location.