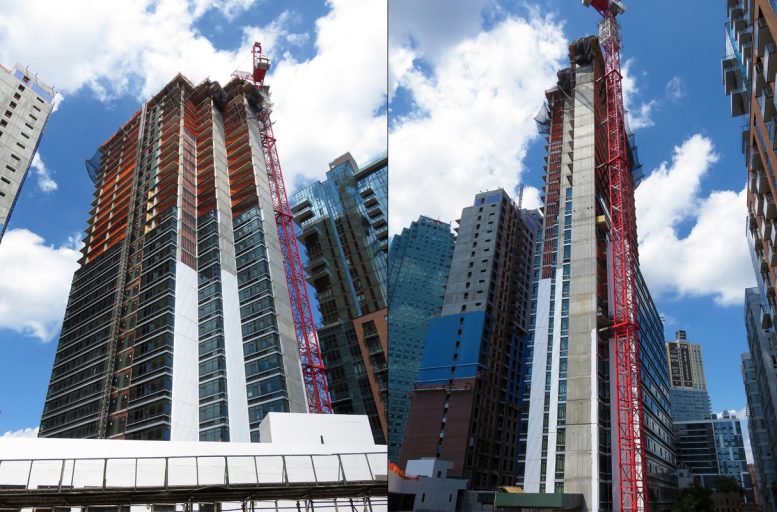 The title of the city’s construction hotspot of the summer may go to the Long Island City block bound by 44th Drive, Jackson and Thomson avenues, and Purves Street. As recently as four years ago, only warehouses, auto shops and a handful of rowhomes graced the 1.8-acre trapezoid. In 2014, the 14-story 26-14 Jackson Avenue rose as a herald of greater things to come. The 27-story Harrison at 27-21 44th Drive topped out in June of this year, and the 27-story Watermark Court Square at 27-19 44th Drive, next door, caught up almost exactly two months later. But as those two towers still sport their ceremonial topping-out flags, they are about to be overtaken by 44-26 Purves Street. The project, developed by Brause Realty and the Gotham Organization, is rapidly approaching its final, 33-story height. Once the FXFOWLE-designed, 270-unit luxury rental reaches its topmost point, it will stand just under the 400-foot mark, becoming the sixth-tallest building on the flourishing Court Square skyline. Looking north. 44-26 Purves Street, with its tower crane, is the center.

It took roughly a year for the building to get to this point. Construction kicked off in in June 2015, and the structure rose above ground level by November. The tower reached its midpoint around April 2016, and climbed past the 20th floor by the following month. Since then, it has grown by at least 10 more stories, leaving it only a couple more levels until completion. The building’s final floor count clocks in at 33 according to permits, or 34-35 (plus bulkhead) if one judges by the FXFOWLE renders. Looking west, with Halo LIC in the foreground

Even though it is one of the tallest buildings in Queens, 44-26 Purves Street barely breaks through the freshly-established Purves Street skyline plateau and already gets lost among its high-rise peers. What sets the building apart from the crowd is its distinctive design. As a rule, most new buildings under construction around Court Square and Queens Plaza come in the form of either reflective glass obelisks, or brick-faced abodes, which are frequently adorned with neo-industrial décor. The architects at FXFOWLE took a different approach here, cladding the building’s dominant facades in strikingly horizontal stripes of glass and metal. Narrow concrete bands frame the facade. The building’s closest stylistic peer in the neighborhood, and perhaps anywhere in the city, is the similarly-sized, mixed-use project at 29-11 Queens Plaza North, where construction wrapped up just recently. But even there, its sheer glass façade framed in Brutalist concrete bears only passing resemblance to the Purves Street project.

44-26 Purves Street sits upon one of the neighborhood’s most unusual sites. Its unorthodox shape is reflected in the tower’s massing. When viewed from Purves Street from the north, the building appears more or less conventional. Its horizontal window bands, hemmed in by a mostly-solid shear wall and interrupted by a single setback, channel a certain spirit of mid-century modernism with its clean, geometric restraint. The building’s most intriguing portion faces the south, where the dominant street grid meets the elevated Thomson Avenue. There, the building separates into three thin slabs, stacked at an angle that follows the diagonal avenue. Each of the slabs measures no more than 20 feet wide and stretches uninterrupted to the pinnacle, creating a decidedly vertical presence. The dramatic effect is amplified by the building’s position at the gateway to the Court Square district. Those that enter the neighborhood via the Thomson Avenue viaduct are greeted by the tower’s rectilinear wedge, which protrudes like the prow of an ocean liner. The outermost slab stretches improbably thin in its upper reaches. The building leaves an opposite impression upon those leaving the neighborhood, who see it as a wide slab accented with powerful horizontals. Looking northeast from the intersection of 44th Drive and Thomson Avenue

Two of the three vertical concrete bands facing the avenue act as shear walls, granting rigidity to the narrow profile. Here, the floor plates protrude to the south, creating three bays of unobstructed corner windows facing south and west. It goes without saying that corner spaces, whether residential or office, are always in high demand, particularly when they are not obstructed by columns (as is the case with many glass-clad buildings). The layout of 44-26 Purves allows for six corner windows per typical floor, rather than the standard four. The same approach has been more famously employed by Skidmore, Owings & Merrill in the nearby Citibank Tower, now known as One Court Square. The iconic office tower, which has reigned as the borough’s tallest since 1990, boasts nine corner windows per typical floor. These corner windows, along with the rest of the west-facing facade, open upon panoramic vistas of Queens, Brooklyn, and Lower Manhattan. While many residents of Long Island City’s new apartment buildings should expect to have their views blocked by the latest batch of towers, the residents of 44-26 Purves need not worry. Their eastbound views, which open onto the densely-built Purves Street, will soon be further restricted by the 55-story tower slab at Eagle Lofts (though this would not be a problem for skyscraper aficionados such as ourselves). On the other hand, the prized eastbound and southbound views are guaranteed to remain open, thanks to the building’s wide podium, a number of historic low-rises across Thomson Street, and the wide Sunnyside Railyard behind it. This ensures that whatever does rise within this field of view (such as the 5Pointz apartment complex), would stand sufficiently far away to avoid significantly blocking the panorama.

When we saw the white-washed concrete walls upon the north and south facades, as well as at the base, our first guess was that the initially-planned bronze-colored paneling was eliminated from the design as a cost-saving measure. This is what happened to the metal facade of the Steven Hall-designed Hunters Point Library, which is underway on the Long Island City waterfront. There, the façade treatment has been substituted with silver paint, saving taxpayer dollars at the cost of aesthetics. Thankfully, the white paint at 44-26 Purves, which would have been a passable but underwhelming surface finish, is just an underlay for the panel system. Once the vertical array climbs up the façade, it is bound to transform the blank walls into one of the most striking design features in the neighborhood. Although we are yet to see their eventual look, the panels appear to pay homage to the metal fence of the Sculpture Center, which graces Purves Street just down the block from the new high-rise. Although structurally complete, the building base still awaits its facade along Purves Street, while the Thomson Avenue side is wrapped in scaffolds. The podium, which would contain retail and residential amenities, fills the entirety of the irregularly-shaped site. More importantly, it resolves the unusual elevation of the adjacent streets. Most of Long Island City’s flat landscape, which includes Purves Street, lies almost at the sea level. However, the site’s western boundary meets one of the neighborhood’s few elevated streets, which was shaped by the need to cross the adjacent Sunnyside Railyard. In a gradual climb, 44th Drive meets Thomson Avenue, which rises like a hill to meet the viaduct that crosses the massive railyard, which separates Hunters Point and Court Square from the rest of Queens to the east. The south end of Purves Street runs into the almost 30-foot-high concrete wall of the Thomson Avenue viaduct. Thus, the building’s residential lobby at Purves Street sits a full level below the retail entrances along 44th Drive and Thomson on the other side. Thomson Avenue is on the left. Purves Street is on the right.

The Thomson Avenue railing atop the concrete wall treats the viewer to the most dramatic urban canyon in Queens. Rows of apartment towers flank the sidewalks of what was a sleepy industrial cul-de-sac just a decade ago. The glass façade of 44-26 Purves enhances the composition. Its horizontal lines draw the eye down the canyon towards a townhouse row on Jackson Avenue, which lends a sense of scale to its new, giant neighbors. As we argued in the past, we urge the city to make certain alteration to this unique street junction. This is particularly important now, since over 500 new apartments are scheduled to join the block within a year. At the moment, the sidewalk on the north side of Thomson Street, the one with the “scenic overlook,” runs into a dead end where the Queensboro Bridge viaduct meets the avenue. As such, it is rendered completely useless in terms of pedestrian circulation. A new crosswalk is needed to access the other side of the street, which is Court Square’s only connector to the vibrant neighborhood on the other side of the railyard. A traffic light is already present at this intersection, so introducing a pedestrian crosswalk would not disrupt the traffic flow. The site of the suggested Thomson Avenue crosswalk at the existing traffic light. The Queensboro bridge viaduct starts to the left.

Besides, the currently-useless sidewalk on the north side is wide enough to accommodate public features that would make it into an appealing urban space, like benches and greenery that may shield the public from traffic. Looking west along Thomson Avenue. The Purves Street Overlook is on the right.

A more involved, but equally beneficial intervention would be a new staircase leading from Thomson Avenue down to Purves Street. It would provide a second access point to the almost-suburban cul-de-sac, where residents of 44-26 Purves and the Halo LIC apartment building across the street currently need to trek 500 feet north to get to the nearest intersection. In addition, this point of access would improve street safety: if something unsavory goes down on the quiet block, two exit points give more options for escape (while Court Square is a generally safe neighborhood, street safety is always a concern for those of us who had the misfortune of meeting the uglier side of city living). Finally, if anyone is worried that the staircase would be uninviting and dreary, they need to consider our city’s successful examples of elevated public passages, from the landscaped staircase at the Elevated Acre at 55 Water Street in the Financial District, to the High Line, which is arguably becoming a victim of its own runaway success. It is just a matter of thoughtful design. Looking south along Purves Street. The concrete wall seen at the end of the block would be the site of our suggested connector.

Of course, we do not envision this space becoming a crowded tourist conveyer a la the High Line, but it does have potential for improving the pedestrian experience in a neighborhood not originally built for pedestrians. The unique street grid of the Court Square district provides many possibilities for one-of-a-kind public spaces. We hope that the city takes advantage of this opportunity to improve the pedestrian experience in this emerging neighborhood.