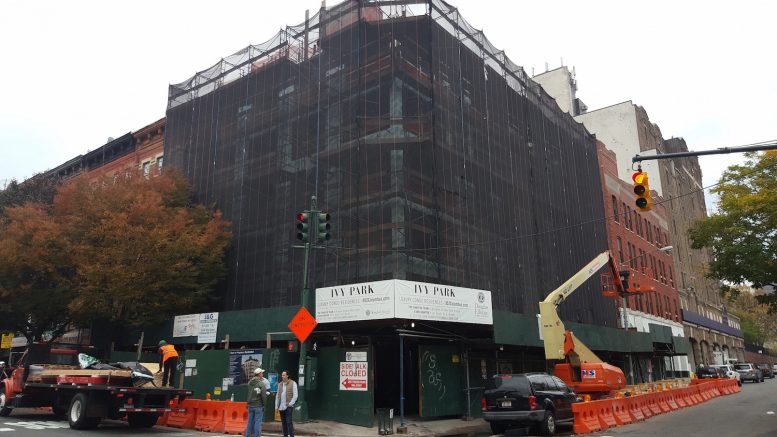 A little over a year ago, YIMBY revealed a seven-story condo project planned for 952 Columbus Avenue on the Upper West Side. Now, we have a construction update on the development, which topped out a few months ago at the corner of 107th Street. The marketing team for the building, dubbed Ivy Park, sent along these photos and interior renderings. Windows are going in now, and workers will start installing facade panels soon. Borough Equities is developing the building with the Pentecostal Church of God, which owned the site until last year. Fifteen condos will be stacked on top of the 2,800-square-foot church on the ground floor. A kitchen at 952 Columbus Avenue. rendering via Douglas Elliman

Those 15 apartments will be divided across 17,305 square feet of residential space, and average units will measure 1,153 square feet. Asking prices start at $1,100,000 for one-bedrooms, $1,595,000 for two-bedroom, two-baths, and $1,795,000 for three bedrooms and two baths. Sales are expected to launch in the next few weeks, and Evan Shaffer at Douglas Elliman is marketing the project. A living room at 952 Columbus Avenue. rendering via Douglas Elliman

Future condo owners will be able to enjoy a 1,000-square-foot roof garden, a rooftop lounge, fitness center, deeded storage with each apartment, and bike storage.

Lawrence Pinner, of Pinner Architecture, is responsible for the design.

Borough Equities bought the 5,000-square-foot property from the church last year for $6,500,000. For those of you keeping score at home, that means they paid $322 for each square foot of their building. A bedroom at 952 Columbus Avenue. rendering via Douglas Elliman